MAP23: The Unholy Temple is the twenty-third map of Doom 64, designed by Tim Heydelaar. It uses the music track "Relentless Coil". 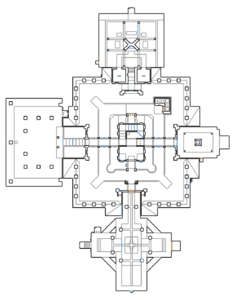 Map of Unholy Temple
Letters in italics refer to marked spots on the map. Sector and Thing numbers in boldface are secrets which count toward the end-of-level tally.

The sky is dark with forever burning green fire, signifying how deep you are in Hell. You start off in a small moat that surrounds the central temple that vaguely resembles a pyramid. On top, you can barely see Hell knights and spectres viciously wanting to chase you down. In the moat, there are several arachnotrons that are luckily encountered one by one. There is a teleport at the end of the moat that takes you to the "second" floor of the temple. After defeating the spectres and Hell knights, you climb up the temple to turn on the switch which will you go inside the temple. Inside the temple are several corpses and two barons of Hell waiting to ambush you as soon as you step in. Continuing on there is a room with a couple of arachnotrons also waiting to ambush you as soon as you take the megaarmor.

Once you collect all three skull keys you need to enter a room to input a code-like sequence that corresponds to the colour of a key. The reason for this is because through-out the level, there are three locked doors that have the colour of the keys etched in right beside them. The order from left-to-right is how you must activate the switches in the code room. If you get the code wrong, you are trapped and forced to fight two Hell knights. If you get it right, the room will unlock and you must push a button that will remove one barrier from the exit. Once all barriers have been lowered, you will be able to exit to the penultimate level No Escape.

On the second tier of the temple, there are two sections of the walkway that trigger homing fireball traps from the buildings across the moat. These sections are marked by a pair of columns positioned near the edge of the walkway that support an even higher walkway which you traverse later on. Stop evenly in between the middle of the columns so the homing fireballs will hit them instead of you, then you can proceed safely.