MAP23: Walken in a Winter Wonderland is the twenty-third map of 32in24-14. It was designed by Shadow Hog, and includes a circular arena based on MAP15: Mark It Zero from 32in24-12, as well as a secret object borrowed from 32in24-13 MAP01: LET THE BURGERS HIT THE FLOOR. It uses, as the music track, an example MIDI version of "Winter Wonderland" released by the Roland Corporation. 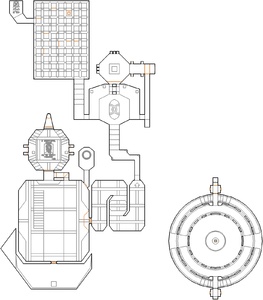 Map of Walken in a Winter Wonderland
Letters in italics refer to marked spots on the map. Sector, thing, and linedef numbers in boldface are secrets which count toward the end-of-level tally.

* The vertex count without the effect of node building is 6234.