MAP24: Clandestine Complex is the twenty-fourth map of the second release of Alien Vendetta. It was designed by Lee Szymanski and Anthony Soto. It uses a MIDI rendition by Christer Holm of the Level 1 theme from the Commodore 64 game, The Last Ninja 2. It replaced MAP25: Valley of Echoes, with MAP24: Demonic Hordes moved to the MAP25 slot. The par time defined in the executable is 6:00. 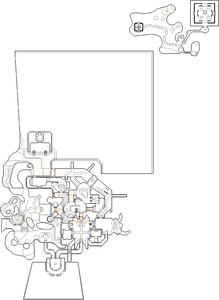 Map of Clandestine Complex
Letters in italics refer to marked spots on the map. Sector, thing, and linedef numbers in boldface are secrets which count toward the end-of-level tally.

You are going to have to do some climbing at the start. Grab the shotgun, and if you want a chainsaw, climb slightly and drop off to the right. Otherwise, climb to the top to see the complex. The door to the complex requires the red key, so you will need to do some more climbing. You should see a super shotgun nearby. Grab it, and head through the narrow passage to climb the rocks up. Jump to the other end and find the upper ledge for you to jump to. From here, head past the door to the next area, and go till you find an open manhole into the sewer. Make sure to grab a radiation suit before entering. Go through till you find a room with a chaingun. Grabbing it lowers the nearby lift so ride it up. Follow this ledge till you find the other sewer entrance. You will need to make a jump to reach the other side. Go through this one to the alternate entrance to the complex. If you try to open the door here, it will be stuck, but the passage to the right which was blocked off will open revealing some demons. Go through here, then go southward through the nukage tunnel to a door. Enter this door and the bars should open allowing access to a switch. Flipping this opens the door into the complex, so enter it now.

You will enter into a storage area. First, head through the small hall where you will take the lift down to a room with a number of passages. Take the one southeast first, to a lift which raises as you press the switch. At the top, press the next switch here, to lower the nearby wall to get out, but more importantly opening a passage in the nukage where the demons were. Leave the complex, watching out for the swarm of monsters, and head back here grabbing the plasma gun (make sure you have another radiation suit if necessary). Go all the way to the end here to find the red keycard. Look out for the arch-vile on the steps, then reenter the complex. You need to head behind the big brown crate near the western side of the storage room. There are a couple of small crates for you to step on, going through the window. Enter the door you see here to head onto a balcony outside the actual entrance, then go to the west side of the balcony to find the yellow keycard. Then, head to the south end of the balcony to find a yellow door; inside is a switch you should press. Now head back inside the complex and head down the stairs. The door to your left will automatically open, but this is the first entrance to the complex, so you already know where this area is. Instead, head up the next set of stairs and you should find another red door at the end here. Head through it, and there should be an open door to the north. Go through this open door, all the way through this room to where you see the blue keycard. The nearby switch lowers it, but also some walls revealing monsters. Now backtrack, to the last red door you took, and press the wall near the pipes for a shortcut to the lift downwards. Back in this room, head northeast to find a blue switch for you to press. When you press it, the bars around you open, so go west killing the spider mastermind in your way and heading back outside. Here, you should see the blue door. Watch out for the mancubi who teleport in, and open the blue door, kill the arachnotron, and exit.

There is a locked building in the western elevated portion of the map. There is a way to get into this building without cheating. In the southeast portion of the map, there is a set of slimefalls embedded in a rocky area. At the top of this area (Sector 447) is a dark entrance. To get onto this area, you need to be boosted up onto the rocks by the attack of an Arch-vile, which can be released upon picking up the Red Key. It is recommended to be running onto the brown ledge next to the slime staircase (Sector 459) when being attacked. Once you get onto this ledge, kill the Arch-vile. To climb onto the rocks, go to the northern side of Sector 445 and you will see a very small step (Sector 502). At the top of the rocks, step into the dark cave entrance and you will be teleported into the locked building. Step onto fake teleport pad in the center of the room to lower a staircase and reveal the real teleport, leading to a "Hell of Flame". This isolated area of the map is a homage of sorts to prominent speedrunners of the past, featuring "monuments" honoring Yonatan Donner, Adam Hegyi, Daniel Lindgren (Demonlord) and Marijo Sedlić (Sedlo). Note that if you fall into the void in this area, you will not have any means of escape and will die.

A large HOM is visible from the area surrounding sector 186 (blue armor secret). It is significantly worse once the sector 278 metal bars are raised.

* The vertex count without the effect of node building is 3298.