MAP24: Culture Shock is the twenty-fourth map of Ancient Aliens. It was designed by Chris Kassap (lupinx-Kassman), with edits by Paul DeBruyne (skillsaw), and uses the music track "Imaginarium," composed by Stuart Rynn (stewboy). The par time is 7:00. 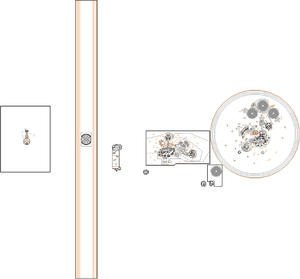 Map of Culture Shock
Letters in italics refer to marked spots on the map. Sector, thing, and linedef numbers in boldface are secrets which count toward the end-of-level tally.

At the red skull area, the switch lowers the red skull as well as a white block with a revenant inside, both for 10 seconds. If you stand inside this block as it rises, you will be unable to get out.

The maximum number of items you can receive for this map is 92%, as three health bonuses are unobtainable.

* The vertex count without the effect of node building is 17929.