MAP24: Diehard is the twenty-fourth level of Memento Mori. It was designed by Dario Casali and uses the music track "The Wind" by Mark Klem. 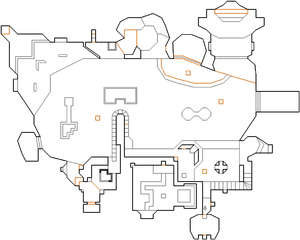 Map of Diehard
Letters in italics refer to marked spots on the map. Sector, thing, and linedef numbers in boldface are secrets which count toward the end-of-level tally.

You begin in a nukage-filled room, facing a horde of shotgun guys, demons and a couple of imps right off the bat. The BFG9000, if available, will take them out in a flash. The nukage does not hurt, so feel free to step on it. Take out the baron of Hell on the east side of the room, then go through the teleporter ahead.

This teleporter takes you to a ledge overlooking a pit of blood. Flip the switch ahead of you to raise a bridge in the east. Clear out the chaingunner tower in the east (it has up to four chaingunners), the cage in the north with a mancubus (two on Hurt me plenty and above, plus a revenant on Ultra-Violence and above). Head across the bridge in the east and take care of the cannon fodder ahead, then go all the way up the staircase to an alcove with an arrow pointing to it. Flip the switch in the alcove.

This switch triggers an instantly rising lift, lifting you into a trap of up to six chaingunners. Go through the teleporter behind them to teleport back out to where the arrow was. You can either backtrack to the ledge you started at and go to the U-shaped staircase in the west, or step into the teleporter next to you to be teleported directly to that staircase. However, the latter option may drop you in the middle of multiple chaingunners if they have not left that area, so be careful.

As you go up the U-shaped stairs, equip the BFG9000. As you approach the bend, the wall in front of you will open, releasing a horde of cacodemons and pain elementals. Nuke them down with multiple BFG shots. Continue up the stairs to a platform with four imps, and from that vantage point, clear the cage to the west with a mancubus and two revenants and continue forward.

In this next area, first clear the two chaingunners in their cages. As soon as you cross the line of medikits, the central obstacle will open, revealing three barons of Hell. Use your BFG before they trap you in this confined area. Collect the blue key and the soulsphere from where they came from. Open the door in the south to restock on ammo, then open the blue door and take out the revenant or two on this ledge. If you can use this ledge to snipe out the enemies on the platform north of you with rockets, even better - it will come in handy later.

Step into the teleporter on this ledge, and you end up in an area at the north of the map. Equip the rocket launcher or BFG9000 and make your way around the square-shaped protrusion in the wall. As soon as you hear it open, turn around and burst down the arch-vile in the cage. Move through this area, which mostly has cannon fodder enemies (apart from two cacodemons on Ultra-Violence and above). As you make your way through this area, cacodemons and pain elementals will be released into the level from two isolated traps, so be ready. You might even hear a cyberdemon waking up, which is a clue as to what is about to come.

Flip the switch at the end of this area to raise an arc-shaped bridge, and continue along the bridge to a platform with some imps. As you step onto the imps' platform, the wall behind opens up, revealing a nasty ambush of up to five mancubi, four revenants and on Hurt me plenty and above, an arch-vile in the back. Needless to say, this calls for the BFG9000 again. Prioritise the arch-vile, then slaughter everyone. Proceed up the steps and drop through the hole in the floor.

You will be teleported to the platform in the northeast, face to face with the cyberdemon. You will also have to deal with any stragglers on this platform, a revenant cage in the north, and some newly-released cacodemons will be making their way towards you - all on a platform ill-suited for circlestrafing. Try your best to get the cyberdemon to infight with other monsters so you can take out the stragglers; otherwise, you'll just have to dodge carefully from side to side.

Once the cyberdemon is down, head into the hole behind it to end the level.

This map is one of the few maps in Memento Mori that can be completed in under a minute, and one of the few that can be finished in less than 30 seconds. The western teleporter in the blood pit takes you to the upper half of the stairway, and can be used to skip much of the level. After that, it's a matter of speeding through the rest of the path while weathering the enemies' attacks, with the help of the soul sphere in the blue keycard compartment.