MAP24: Dimension Palace is the twenty-fourth map of NDCP2. It is referred to as Dimension Jump on the intermission screen. It was designed by CrazedImp and uses the music track "". 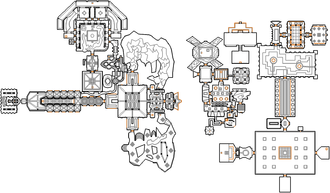 Map of Dimension Palace
Letters in italics refer to marked spots on the map. Sector, thing, and linedef numbers in boldface are secrets which count toward the end-of-level tally.

A soul sphere (thing 717) is in an inaccessible portion of the map on the east side. It is impossible to get 100% items because of this item.

* The vertex count without the effect of node building is 11213.