MAP24: Factory: Conversion Chapel is a level in Strife. It uses the music track "Panther".

The Strifeguy visits this area seeking the converter being used by the Order to transform citizens into acolytes. After finding and shutting down the machine, he learns from BlackBird that the Oracle was right about Macil's treachery, as he has sent two hundred men to their deaths. 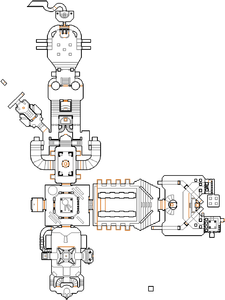 Map of Factory: Conversion Chapel
Letters in italics refer to marked spots on the map. Sector, thing, and linedef numbers in boldface are secrets.

Head through the door and destroy any sentinels and reavers in the next room. The path to the east is blocked by two sets of bars, and to open them you will need to find two crystal keys elsewhere in the level. They can be collected in either order.

Go through the north door from the starting area to a room with a low ceiling. Cross the room and flip the switch at the north end, watching out for the templar and any stalkers that ambush you. Flipping the switch lowers some barriers in the center of the room; go through these and step on the Sigil tile, watching out for the crushing ceiling above, and go through the west wall that lowers. Go up the staircase, slay the templar waiting at the top and turn right, go down some more steps and turn left, then go straight ahead to a set of bars which will open as you approach. Go through the silver door and climb the steps to collect the chapel key.

Retrace your steps to the corridor where the bars lowered, then turn left and left again. Head down a steep set of steps and turn right at the bottom to see a wooden door that requires the chapel key. Go through and a ceiling will lower in front of you with a switch; flip this and turn round to go through the stone barrier which lowers behind you. Enter the water ahead and jump up the green steps to the top, then follow the walkway to the red crystal key. Taking the key releases a number of stalkers into the water area. As you backtrack to the starting room you will also find that a templar has appeared at the south end of the water pool, and crusaders have been released near the staircases leading to the room with the Sigil tile.

Return to the starting area and go through the south door. Follow the walkway and jump across to the central platform. (The green water in this area inflicts damage at regular intervals. If you fall in, use the passage on the west side to climb back out.) Pulling the switch will temporarily raise two platforms to the east and west; you need to cross both platforms and flip the switches in the chambers beyond. The west switch is protected by a crushing ceiling so you will need to time your approach.

When both switches are activated, return to the central platform and step on a floor to the south that has risen, then jump south to another rising floor and climb either staircase. Slay the acolytes here and take the blue crystal key from a hole in the south wall. Watch out for the two crusaders guarding the door back to the starting area.

With both crystal keys, return to the starting area and flip the switches on either side of the bars blocking the east doorway. Go through to a tall room with eight alcoves that all contain templars. Fight or ignore them as you see fit (they will not attack as long as you avoid firing your weapons) and climb the steps at the east end of the room, then go through the door at the top and take the teleporter beacon behind it. Climb the green steps and kill all the enemies in the converter chamber, then climb the steps leading up to the machine and press the control panel with hazard markings to shut down the converter. Doing so awards a stamina and accuracy upgrade.

BlackBird will inform you that Macil has "gone nuts" and demands vengeance. Press the small button next to the converter switch to open a teleporter behind you, then step into it to return to the starting room. You now need to backtrack to the Front's new base in order to confront Macil.

Notice that by destroying the converter (by pressing the control panel), you will close the path to a switch that is needed to access all three secrets.

* The vertex count without the effect of node building is 2793.