MAP24: Hatred is the twenty-fourth map of Scythe. It was designed by Erik Alm, and uses the music track "Smells Like Burning Corpse" from TNT: Evilution. 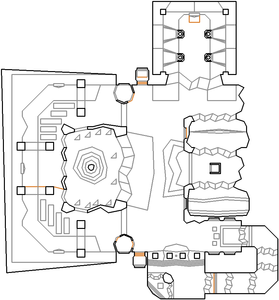 Map of Hatred
Letters in italics refer to marked spots on the map. Sector numbers in boldface are secrets which count toward the end-of-level tally.

At the beginning, some imps will attack, so get the weapons nearby and kill them. There are several Hell knights, barons of Hell, and a cyberdemon in the general area. To the north you can acquire the red skull key, along with some mancubi in cages. Grabbing it actually lowers the yellow skull key for later. Now go towards the blue door and use the nearby lift to go up. If you are not playing on Ultra-Violence or higher, there will be an invulnerability here, as well as a soul sphere (on all difficulty levels). A lot of revenants will attack you on these upper reaches, so fend them off as best as you can going around and getting the blue skull key at the very end. Dropping back down into the main area, watch out for the cacodemons who teleport into the cave with the hellish column, then head through the blue door. Grab the BFG9000, then head out of this small room going to where the cyberdemon was to reach the lava bed. Make sure you grab a radiation suit before you go though. Go through the lava stream to a room with a soul sphere and an arch-vile. If you got the red key earlier, the yellow key will be available. Back in the main area, there may be a spider mastermind. Now open the yellow door to find an arch-vile and the exit.

This map has a red skull key but does not have a red door. However, to collect the red key the player crosses a linedef which lowers a pillar later in the level, granting access to the yellow key, so this is more of a feature than a bug.

* The vertex count without the effect of node building is 1054.