MAP24: Heck is the twenty-fourth level of PlayStation Final Doom, and the eleventh and final level of the TNT episode. It is based on the PC version of MAP28: Heck from TNT: Evilution, with modifications to accommodate the PlayStation's framerate and memory limitations and add enhancements such as colored lighting. It uses the music track "Twisted Beyond Reason".

After completing this level, the player is presented with a cut-down version of the ending text from TNT: Evilution. They are then sent to MAP25: Congo with their inventory intact. 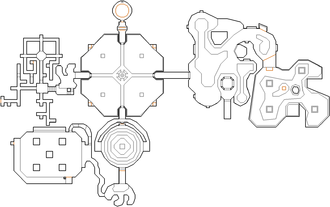 Map of Heck
Letters in italics refer to marked spots on the map. Sector, thing, and linedef numbers in boldface are secrets which count toward the end-of-level tally.

Three keys are required to exit the level and they can be collected in any order.

In the starting area, follow the southern bridge (in front of you at the beginning of the level). Grab the megaarmor if you want it and take either hallway. You will encounter some lost souls around a marble platform with a megasphere. Press the switch on the north wall, which lowers both the platform with the megasphere and the metal wall to the south, revealing one to three revenants depending on skill level. Head through the wall while it is temporarily open. In the cave, turn right and follow the tunnel to an outdoor area with many imps and lost souls. Drop off the ledge, turn left and use the silver lift to get into the caged area. Follow the walkway round and take the red skull key, which will open an alcove nearby containing more revenants. Leave the area using the staircase in the north-east corner of this room and backtrack to the starting area.

Follow the eastern bridge in the starting area until you find yourself in a white-walled cave. Head north-east and follow the tunnel round to a tall room with marble brick pillars. Take the yellow skull key from the center of the room, which will open a number of alcoves containing monsters. Fight them if you want to, then return to the starting area.

Follow the western bridge in the starting area. Turn left and climb the stairs, then go west down some more stairs to a marble maze. Remember the area you start in as you will need to return here later. Go straight forward (west), turn left (south) and then turn right (west). Press the skull switch in front of you to open the other parts of the maze, then backtrack to the start of the maze. Go north, turn left (west) and left again (south). Take the blue skull key at the end of this hallway, killing the revenant that blocks your way. Backtrack to the starting area.

When all the keys are collected, follow the north bridge in the starting area. Open all of the doors in front of you and jump into the large pit to end the level.

Four blood hooks (things 242-245) appearing on Deathmatch-only game will spawn hanging from the sky in the starting area.

Many monsters in the map have Deathmatch-only flag set. Since this multiplayer mode always turns monsters off the following foes will never spawn:

* The vertex count without the effect of node building is 998.