MAP24: Hell Beneath is the twenty-fourth level in the Ultimate Doom episode of the PlayStation and Sega Saturn versions of Doom. It is based on the original E4M1: Hell Beneath, with modifications made to adapt the map to the consoles' memory and speed limitations. The author of the original map is American McGee. 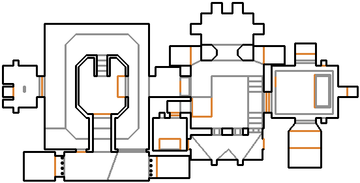 Take the shotgun and enter the open area. Shotgun guys will start spawning here, so repel their attacks. Afterward, head past the red door into the arch. Inside, turn right and push the switch at the end. Return back to discover a wall opened at the west revealing western area. Go there and turn right. You should notice an entrance to the building at the bottom. Carefully jump there and go to the southern end into a room. Here you can find the red skull key. Taking this will spawn numerous enemies around the level and in this room, so repulse their attacks. To escape either push a wall in the second room leading to the western courtyard or use the lift at the entrance to the first room.

Backtrack to the starting area and open the red door. Walk around the metal wall and kill the imps behind it. Find the blue skull key here, but note that once you take it, some enemies will spawn around.

With the blue key you are ready to exit the level. Go back to the western area you first found red key and open the blue door. The teleporter pad is the finish.

This level includes the first appearance of the bloody meat hook decoration, which originally served as a replacement for the arch-vile. They are found in the following locations:

The red key is moved further away from the bars due to the fact that players in all ports based on the Atari Jaguar code base are wider than the PC equivalent, which otherwise would have made accomplishing the red key item bump trivial in this version.

The Nine Inch Nails reference formerly to be found in the secret behind the red key door has been removed, either to reduce the size of the level in memory or because of trademark concerns. While the secret itself still exists, the floor within it is plain and level and the secret contains various gory decorations.

All the barons of Hell, which account for much of this level's steep difficulty, are replaced with Hell knights. This is true in several of the other maps taken from Thy Flesh Consumed.

* The vertex count without the effect of node building is 375.