MAP24: Intersection of Oppression is the twenty-fourth map of MAYhem 1500. It was designed by Michael Fraize (Marcaek) and James Collins (an_mutt), and uses the music track "Where Silence Has Lease," originally composed by David Shaw (Tolwyn) for GothicDM. 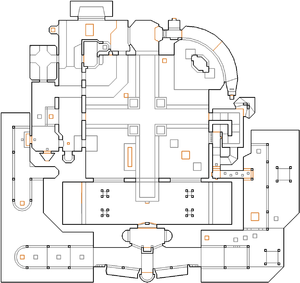 Map of Intersection of Oppression
Letters in italics refer to marked spots on the map. Sector numbers in boldface are secrets which count toward the end-of-level tally.

* The vertex count without the effect of node building is 1145.