MAP24: Io Lab is the twenty-fourth level of Memento Mori II. It was designed by Sean Birkel in a techbase style reminiscent of Knee-Deep in the Dead, similar to his famous Doom episode replacement, Fava Beans. It uses the music track "GloomKeep" by David "Tolwyn" Shaw.

The level appears to be based on "Shit for DOOM" (SHIT.WAD), an incomplete Doom level that Birkel had submitted to the idgames archive when he lost mapping inspiration. The original was a replacement for E1M7: Computer Station, and was influenced by that level. The beginning area of this level is highly reminiscent of that of E1M7: Titan's Anomaly from Fava Beans.

This region was one of the first human on Io. The technics [sic] are old and of no use, but the enemy might be interested in it. We don't expect any humans in there, since these buildings were closed months ago. The thing is, when you're back we don't want to have ANY creature out there anymore. So, get going. Nice and easy, you've got plenty of time for this. 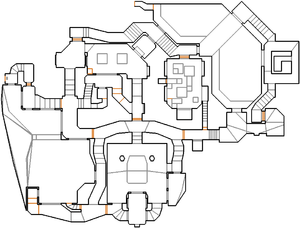 Map of Io Lab
Letters in italics refer to marked spots on the map. Sector, thing, and linedef numbers in boldface are secrets which count toward the end-of-level tally.

Io Lab is a relative breather compared to the previous maps (and the maps ahead). The monster population, while high for a small map (184 on Ultra-Violence and above), is mostly composed of the usual cannon fodder of zombiemen, shotgun guys, imps and the occasional lost soul. However, the first two are hitscan monsters and harder monsters do appear at some parts, so don't get too complacent.

You start in a raised room with a window, overlooking a large room with a nukage pool. This room is teeming with the usual cannon fodder, but you probably won't want to deploy the rocket launcher until you take out any stray lost souls (up to six). Head down either flight of stairs to either side of the raised room and clear the large room out.

Next, head to the door in the west of the flight of stairs to the west of the starting room. This leads to a corridor with even more cannon fodder. However, be careful of up to three revenants in the far end of the corridor. As you continue forward, you will pass a passageway to the right (north) with even more enemies, including one more revenant. The chaingun works great on the cannon fodder; use the super shotgun on the revenants.

Go to the far end of the corridor, and a lift to the north will lower. Equip your BFG9000 if available; otherwise, equip your super shotgun. Step onto the platform and ride it up, and you will come face to face with a mancubus. The platform will not re-lower until you manage to step into the mancubus' space, so you have to be ready. A BFG shot will instantly shred it; if not, your super shotgun will interrupt it almost every time it tries to attack. Once it is dead, grab the yellow key from the nearby window.

Backtrack to the east of the corridor, then head north through the passageway near the silver door. At the end of the passageway, go through the yellow door to the west and continue forward. There's still more cannon fodder (and one spectre) ahead, which shouldn't be too much of an issue. At the junction, continue north up the steps into a larger room with two computer panels and even more cannon fodder.

At this point, you probably should go into the large room in the east and pull the barons of Hell in the room (up to three). If you deal with them now, you will have less issues later. Pull them towards your side of the room and see if you can start any monster infighting, letting them clean up the cannon fodder for you. Dispose of them as you like, then return to the room with the two computer panels and head through the door in the north.

This next room is a crate room with two paths. Head to the west side of the room and carefully work your way along the path. The opposition is minimal, but your biggest concern will be the two barrels along the path, which you should carefully blow up. Behind the second barrel is the red key in a corner. Pick it up and backtrack to the door, then exit the crate room. (If you don't peek over to the east side of the room, you don't have to deal with the trap opened by picking up the red key.)

Backtrack to the yellow door, go through it, then go all the way east to the red door. Head down the steps and clear the room ahead of cannon fodder, then head north into the outdoor area. Here you will find some cacodemons and some lost souls, as well as a lone imp. Proceed to the alcove in the northwest, kill the chaingunner inside and flip the switch behind it.

A wall to the northeast will raise, revealing a cacodemon (Hey, not too rough and below) or two pain elementals (Hurt me plenty and above). There's also a zombieman and a shotgun guy behind these monsters, but those are no big deal. Head into the room that they came from, grab the BFG9000 and head up the steps.

This next room has up to four Hell knights. Your goal is to find the alcove in the east side of the central structure. This alcove has the blue key and more Hell nobles to deal with:

These monsters are nothing fancy, and should go down to the BFG or salvos from the super shotgun. Grab the blue key from the alcove, then head down the steps in the south. Step off the brown platform and head west to the red door. However, just before you go up the staircase heading towards the red door, equip your chaingun, face left (south) and strafe right (west) to the red door. The cannon fodder in the trap that opened next to the red door will not stand a chance.

From the red door, head all the way west to the yellow door. This time, head north and go through the blue door in the west. There is an imp, a lost soul and up to four revenants on the stairs. Rockets may come in handy here once the revenants are the only monsters left.

Continue forward to the exit door. You only have a couple of former humans to deal with from here. Kill them, head up the stairs and flip the switch to exit the level.