MAP24: La Casa del Diablo is the twenty-fourth map of the Newdoom Community Project. It was designed by Rex Claussen. 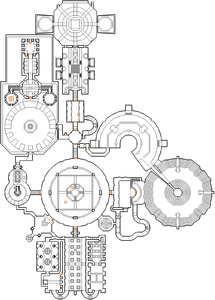 Map of La Casa del Diablo
Letters in italics refer to marked spots on the map. Sector numbers in boldface are secrets which count toward the end-of-level tally.

At the start you are surrounded by imps. The bars behind you can be lowered by two switches, seen from the ground floor where you start. To get them, follow both paths to the south, which eventually turn northward. Hitting the switches at the end allows access to the northern door. Behind this door is a main, circular chamber. In the middle lies a cyberdemon. You have a choice of two paths, left or right. Go right first, and take the stairs to your northwest into a large, red area with a basin of blood. Try to avoid the blood here as it is damaging, and navigate around the red wall to an opening northward. In the next semi-circular room, head across the thin, rocky wall, all the way to a tunnel where you will eventually find the red skull key at the end. Grabbing it also opens the bar in front of you. Now take the western path in the big circular room, and past the door, climb the steps to the next ledge. Enter the shack in the center (being mindful of the crusher) and you will find a small switch. Pressing this one opens the northern door. You will find yet another circular area. Step across the slime and up the steps to the north door here. Go north, and a lift should lower for you. Go up here and grab the chainsaw, watching out for heavy weapon dudes in the windows behind you. Press the switch here, then go back to the outdoor circular area to find the eastern passage accessible.

You will find a teleporter and another room. Before taking the teleporter, press the switch to the south to allow access from the main circular chamber. Also, if you have not killed the cyberdemon in the center of the chamber yet, be careful if you decide to enter the teleporter now, as you will be in close range of him. You can get the yellow key in the center. Now you can go and grab a few optional items if you need them. Behind the yellow bar on the western path, you can grab a plasma gun. Back at the start is a yellow bar with a soul sphere. You can get a megaarmor from the eastern path. Do note that the yellow key is optional however. Now go back to the room north of the main chamber taking the red bars and up a lift. Go all the way north into the final chamber. Here, go to the northwest, dropping into a divot with a switch. Press it to rise back up, and reveal a spider mastermind and the blue key. Now go northeast to the blue door to exit.

* The vertex count without the effect of node building is 5100.