MAP24: Military Base is the first secret level of most console versions of Doom, based on the original E1M9: Military Base with modifications made to accommodate consoles' limitations. The author of the conversion is American McGee and the original author of the map is John Romero. The map first appeared in the Atari Jaguar version, and is additionally used in the 3DO, Sega 32X, Game Boy Advance, Sony PlayStation, and Sega Saturn versions. In the Jaguar, 3DO and 32X versions, this is the only secret level available in the game.

Despite being from the Knee-Deep in the Dead episode, the level incorrectly uses the hellish sky from Inferno on many of the above ports. Whether or not this is an aesthetical feature or an oversight, some other console releases (namely Sony PlayStation, Sega Saturn and 3DO) use the correct sky from Knee-Deep in the Dead.

In the PlayStation and Saturn ports, this map occupies the MAP56 slot, but it is otherwise identical to the version which occurs as MAP24 in other ports. In all versions of the game, it is reached by finding the secret exit in MAP03: Toxin Refinery. Finishing this level will take the player to MAP04: Command Control. 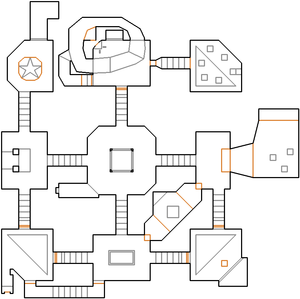 Behind the blue door is the exit room; the exit switch is visible across a nukage canal, but is presently inaccessible. Jump into the canal and follow it around (in either direction) to a platform with a knife switch and an imp. When you step onto the platform, a passage will open behind you. Throw the switch, then enter the passage. Follow it to a lift, and go through the hidden door at the top of the lift. You will now see a wide bridge across the canal. Cross the bridge and throw the switch to finish the level.

North of the yellow keycard room is a room containing a rocket launcher. When you step onto the red star, however, the north wall opens to reveal a number of monsters. A berserk pack can be found at the back of the alcove they emerge from.

In the room east of the central courtyard, the brightly-lit sector along the east wall is a lift that lowers when stepped on. This brings you to an outdoor area containing three tall pillars with imps on top, as well as a medikit and armor. Crossing to the powerups will cause the pillars to lower.

Taking the red keycard opens a wall to the south-east, revealing additional monsters. A medikit can be found in the alcove they emerge from.

The switch that reveals the blue keycard also opens a second passage back to the previous room (on the south wall, behind some barrels). It contains a medikit, a box of bullets, and a box of shells.

In some console ports, this level is incorrectly given the Hell sky from Inferno. This is due to a function in Doom's source code which decides which sky to use on a level by checking the map number. If the number is more than or equal to 18 than the Hell sky is applied to that level. This error was corrected in the Sony PlayStation, Sega Saturn and 3DO releases which use the Knee-Deep in the Dead sky.

In the Game Boy Advance version of the game, the player will not be offered a chance to save the game when entering this level and so it must be finished in the same play session as MAP03. This is most likely a programming oversight related to the fact that it is the only level in that version of the game reached through a secret exit.

The ceiling of the platform in the nukage canal behind the exit switch is high enough that the switch texture tiles twice vertically. It is possible to see the bottom part of the second switch when approaching the platform from the north. This bug is inherited from the PC version of the level.

In the PlayStation release, the sound data for lost souls spat from a pain elemental is never loaded into memory on this map resulting in the lost souls having silent attacks (the death and the pain sounds are still preserved, with the former being identical to any projectile hit and the latter being the pain state sound of any hellspawn except imps).

In the same version of the game, the eastern-most room (three columns and large elevator going up and down) is too tall (height equaling 304 px). Approaching closer to any one-sided wall of the room will cause its texture quietly distort.

* The vertex count without the effect of node building is 513.