MAP24: Necromanteion is the twenty-fourth map of Doom 2 Reloaded. It was designed by Andy Stewart (eschdoom). The par time is 7:45. 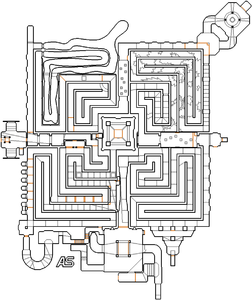 Map of Necromanteion
Letters in italics refer to marked spots on the map. Sector, thing, and linedef numbers in boldface are secrets which count toward the end-of-level tally.

Once you shoot all eight gargoyle switches, the walls blocking the secret will be cleared. On the other side is a BFG9000 along with lots of ammo and two medikits. Taking the steps up leads to a megaarmor and a shortcut to the southwest corner. (sector 462)

* The vertex count without the effect of node building is 2535.