MAP24: None More Merciless is the twenty-fourth map of Valiant. It was designed by Paul DeBruyne (skillsaw) and uses the music track "Frivolous Encounter" from Memento Mori II, composed by Mark Klem. The par time is 11:00. 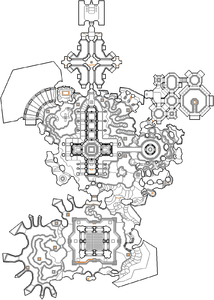 Map of None More Merciless
Letters in italics refer to marked spots on the map. Sector, thing, and linedef numbers in boldface are secrets which count toward the end-of-level tally.

Take the weapons and items around you then drop to the floor below. You are in an area with several octagonal staircases surrounding lava pits, and must make your way to the largest pit on the east side; there are several possible routes, but watch out for attacks from overhead as you advance. When you get to the largest pit, head round to its south side and go up the steps to reach the blue skull key; this will lower two nearby walls revealing cacodemons, as well as allowing several arachnorbs to teleport to the other pits. Go back to the starting area and walk south into a neighboring room, then open the blue key door in the south-west corner to find a tunnel leading outside.

Follow the path east past a super imp and suicide bomber to a trail of rockets, which you can follow south and west until you reach a pair of shotgun guys. Go down either of the staircases on your left, then head east to another staircase which leads down to two imps and a revenant (some more shotgun guys will also teleport to the top of the stairs). Head west until you get outside, then continue west to some steps that lead up to a yellow skull door guarded by a super mancubus. Walk north-west to another staircase and follow this around a crucifix-shaped building until you reach a pentagram tile, then go through the door next to it to enter the building. Kill the imps, shotgun guys and mancubi blocking your path and head to the south end of the building to find the yellow skull key; approaching it will cause imps, pyro knights and an arch-vile (two on Hurt Me Plenty skill level or higher) to teleport in behind you.

Leave the building and retrace your steps to the yellow skull door you passed earlier, go through it and try to walk on the stepped rocks in front of you - they will collapse into the lava below, so run south around the square arena in front of you until you reach the bottom level, where you will find some boxes of rockets and shotgun shells leading to a teleporter that will put you on a winding ledge with some imps and arachnorbs. Take the supercharge next to you then follow the pathways to the south side where one or two arachnotrons are guarding an outcrop; follow the outcrop to some candles that form an arrow, then run north from this point to land in the arena. Super mancubi, bombers, imps, pyro knights and revenants will all teleport in to the arena; kill them then take the red skull key sitting in the middle.

With the red key, go to the metal pillar in the middle of the north wall and flip the switch here to lower the walls of the arena, then go to the south side to find another arrow that points south to another outcrop. Step across to this outcrop then follow the steps east and north until you reach the top, where you can drop down to the path surrounding the crucifix building. A closet to your right will open, revealing revenants and a teleporter; use this teleporter to go straight to the north side of the building, then head north to a red skull door that leads to another arena. Continue north to the center of the arena, collecting a megaarmor on the way; the floor will drop and reveal a supercharge protected by a cybruiser, which you must kill while minimizing the splash damage from its rockets. Taking the supercharge will lower the surrounding bridges and reveal more cybruisers to the east and west.

Once all opposition is cleared, enter the east compartment and press the skull switch; be ready to step back immediately as pyro knights will be released behind you, which will teleport to the arena. Go back to the arena and kill these new enemies, then look north to see cybruisers blocking some skull switches that will activate a lift. Ride the lift up then head north to a red portal, which will send you into a death exit and automatically end the level.

After getting the yellow key, head round to the east side of the crucifix building to find a bridge leading to a round tower. Walk round this tower to a skull switch that will open the tower and reveal a BFG9000, as well as allowing a cyberdemon to teleport in.

* The vertex count without the effect of node building is 18385.