MAP24: Outpost of the Evil Dead is the twenty-fourth map of Plutonia 2. It was designed by Erik Alm, and uses the music track "Against God's Will" by Eric Baker (The Green Herring). The par time defined in MAPINFO is 2:30. 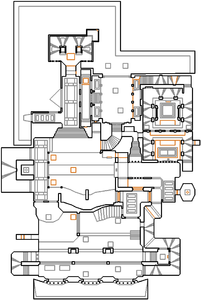 Map of Outpost of the Evil Dead
Letters in italics refer to marked spots on the map. Sector numbers in boldface are secrets which count toward the end-of-level tally.

Kill all the enemies in and around the area at the start. You will need to reach the northeast part of the map, where a door will open with revenants inside. Follow the hall to a room with a switch at the bottom. Pressing it causes some revenants and imps to teleport above you, and a mancubus to teleport right in the depression. Kill the enemies and use the lift to go back up. The adjacent room is similar, but now the blue key is available. Look out for teleporting enemies again, as well as the cyberdemon from the bars ahead, then ride the lift back up. Return to the starting room and head for the southeast corner, killing any monsters you come across along the way. Open the blue door and go southward, going up a stair set and down into a nukage river. On the right side of the river is a switch you can press, opening up the passage on the other side. Follow this passage all the way around until you get the red keycard. Keep going, opening up two red doors and killing mancubi, until you reach a lift going downward to a switch. This switch raises a bridge connecting the starting area to the door across, with the BFG9000 pillar in the middle. Grabbing the BFG9000 causes the door to open, and there is a cyberdemon on the other end (if you did not kill him yet, which is likely). Kill him now and then head for the exit door, where a lone revenant guards the exit.

The lift in the west of the hallway in the north of the northern red door can only be lowered from the bottom, so once you rode the lift up you need to go on. (On hard skill levels there is just a mancubus up here.) Ride another lift down to access the platform in the northeast of the nukage pool you saw when the map started.