MAP24: Perhaps Now the Vultures is the twenty-fourth map of the second episode of Back to Saturn X. It was designed by Richard Frei (Tarnsman) and uses the music track "Petrichor (Blood of the Stone)," composed by James Paddock (Jimmy). In the official add-on version, this level's name is Fire Suppression Exercise.

The map is notable for its enemies. The main challenge is a large number of arch-viles -- between 15 and 25 of them, depending on difficulty -- plus monster corpses that can be resurrected by the 'viles. 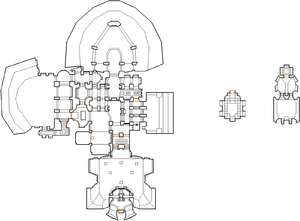 Map of Perhaps Now the Vultures
Letters in italics refer to marked spots on the map. Sector, thing, and linedef numbers in boldface are secrets which count toward the end-of-level tally.

You start facing an alcove with green armor. Proceed past that to either side to an area with a backpack and some health. Press the switch to lower teleporters on either side. Either brings you to the main area of the map, which is a maze-like grid of passages.

You will teleport at one end of a walkway, facing south. Directly ahead of you will be a super shotgun, with a box of shells on either side. To the east/left as you approach the SSG are two connected side passages, which will spring the first of the 'viles upon you. At the end of the second side passage is a berserk pack; south of that, a yellow door.

To the west of where the SSG was is another passage. Around the corner is some health and two boxes of bullets. As you move through this area, you'll wake another 'vile ahead of you, and one more who will teleport in near the SSG. Further ahead, in the northwest corner of the maze, will be a chaingun -- along with more 'viles. Following the passage south will bring you to a door needing a blue key, and release more 'viles behind you.

The ledge east of the blue door is a lift; take it up to a platform that overlooks parts of the maze. You'll find the yellow key here. Picking up the key will lower the adjacent wall, revealing another 'vile -- plus the rocket launcher and some boxes of rockets.

Jump down and proceed back through the yellow door and another 'vile. The passage leads south to a lift. Take it up to the eastern raised platform area of the maze. Follow the passage as it winds around to some more ammo, plus a switch. Press the switch to lower walls behind you, and spring another 'vile upon you.

Back towards the lift you took up (to the south) will be a newly-opened area. This is a another lift, which triggers when you walk upon it. Take it down to a courtyard area, with a tower at the southern end. At either side of the tower is a nook with a lift. Pick one, lower it, and take it up. At the top of the tower, deal with the inevitable 'vile, and then find health, green armor, and blue key. Take the teleporter back down to the courtyard.

You'll find some square pillars have appeared in the courtyard, which will provide much-needed cover at higher difficulty levels. Take the big lift back up to the eastern raised platform, then jump down to the main area of the maze. Proceed back to the blue door, and open it to reveal -- surprise! -- 'vile(s) waiting in ambush. There's also a lift up to a small room with the exit switch.

* The vertex count without the effect of node building is 1662.

Aside from the arch-viles, the map starts with a spread of other (live) monsters, interspersed in a large number of barrels. As soon as the player steps out of the starting alcove, they cross a line trigger. That line starts the floor rising in a hidden part of the map. The rising floor crushes a barrel, causing it to explode. That starts a chain reaction of other exploding barrels. Some of those barrels are knocked into teleporters which drop them into the playable part of the map, igniting the large grid of barrels there, in turn killing the (non-arch-vile) monsters. This seeds the map with corpses for the arch-viles to resurrect.