MAP24: Population Control is the twenty-fourth map of Project Einherjar. It was designed by Mike MacDee (Impie) and uses the music track "". 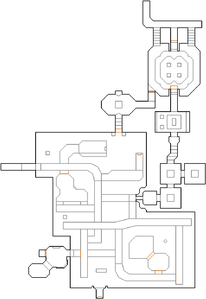 Map of Population Control
Letters in italics refer to marked spots on the map. Sector, thing, and linedef numbers in boldface are secrets which count toward the end-of-level tally.

Grab all you can in the opening room before entering the maze: the wall closes behind you once you step through.

The maze grows larger as you explore it like a rat. Eventually you'll open the way to a series of switches which expand it further and unleash more enemies into its frigid trenches. The third switch you flip opens the maze exit, which leads into a small dungeon. On the other side of the dungeon you'll find yourself trapped inside a coliseum, where you fight Juggernauts, Block Lords, and eventually panicked guards for the amusement of Contessa's minions. Escaping the coliseum will cause the audience to come after you: fight your way through them to the upper levels of the death maze and the exit.