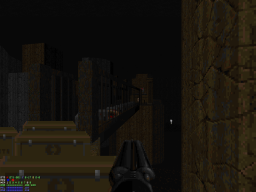 The very hardest map in Hell Revealed. This one is a complete murder - only for the very best players. And there are too many things to save the game on Ultra-Violence, so unless you are really good, try a lower skill or the "shortcut way" (get jumped by the archviles [sic] in the BFG area to the final switch and quickly run to the end).

This level is an underground structure. That blood is dangerous - watch your radiation suits and don't fall. Mistakes are not forgiven here!

A special credit goes to Kai-Uwe Humpert for recording this one, and with a great lmp, too! 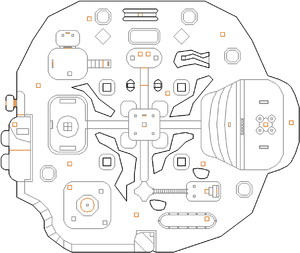 Map of Post Mortem
Letters in italics refer to marked spots on the map. Sector, thing, and linedef numbers in boldface are secrets which count toward the end-of-level tally.

This is perhaps the hardest map in Hell Revealed (especially on Ultra-Violence since you cannot save due to the number of things), as there is virtually no cover unless you improvise and make some. There are bound to be enemies located on every single perch or platform you come across. Skillful dodging will really save your health here.

It is imperative that you eliminate all revenants and cacodemons when you start—unless you have the BFG9000 when you start, jumping into the blood pool below, grabbing a radiation suit, and eliminating the revenants with the rocket launcher is your only option of surviving here; you will be beaten to a bloody pulp if you try to take them on at the beginning.

The cacodemons will swarm you after; kill them also, or else you will be attacked in all directions by them.

The two pillars that repeatedly spawn in mancubi will be particularly be troublesome; if you can, ignore them (unless you are going for a UV max run or something similar), as it is not worth it to unload too much ammo at the mancubi.

Megaspheres are plentiful throughout this level, but they must be used sparingly.

Above all else, be prepared to fight until your last breath-you will not be greeted with a red carpet the moment you enter the level. Make sure you have the BFG9000 prepped up with tons of energy cells, because you will need it!

Because of the large number of things in this level on Ultra-Violence, attempting to save your game in vanilla Doom II on this level will cause the program to crash.