MAP24: Probably Maybe Certainly is the twenty-fourth map of Japanese Community Project. It was designed by Tyousen121 and uses the music track "BdBt4Bt" by Wiz?R. The par time defined in MAPINFO is 2:30. 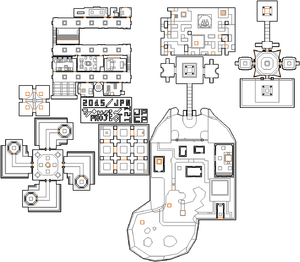 Map of Probably Maybe Certainly
Letters in italics refer to marked spots on the map. Sector, thing, and linedef numbers in boldface are secrets which count toward the end-of-level tally.

All eight deathmatch starts (Things 4 through 11) have no flags set for any of the three difficulty classes, but because of special handling in the engine, they function normally in the level.

* The vertex count without the effect of node building is 4368.