MAP24: Procrustes Chambers is the twenty-fourth map of Requiem. It was designed by Anthony Czerwonka, and uses the music track "Slider" by Mark Klem. In both the text file and the Requiem info pack, the level's title is rendered as Proscrustes Chambers [sic].

Procrustes is a bandit from Greek mythology who invited victims to lay in his bed, and then made them fit it by either stretching their limbs if they were too short, or cutting them off if they were too tall. Procrustes would secretly adjust the bed before his victims arrived to ensure that they would not fit it. His reign of terror continued until he was killed by Theseus, who "fitted" him to his own bed (set in the short position) by cutting off his head and feet.

Within this Gothic Castle-Like Dwelling... some Foul Smelling Chambers exist... some filled with Creatures, and some filled with rotted out Flesh ! Though some Marines before you have fallen to their fate, you must find their remains, and carry on... 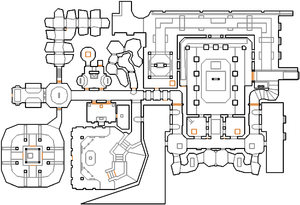 Map of Procrustes Chambers
Letters in italics refer to marked spots on the map. Sector numbers in boldface are secrets which count toward the end-of-level tally.

Climb up the stairs at the start and you will see a room of supplies on the other side of the cage. If you look out the window, you will see a wooden demon emblem. Shoot it to raise a bridge nearby. You can also head east at the start and climb the stairs here to get to the room of supplies and shoot the emblem close to that window as well. When you raise the bridge, cross it into the room with the guillotine. There will be a mancubus and some revenants in this room, and you will find the blue skull key in the northwest corner. Grab it and leave the room, heading to the blue door near the starting point. Go through it into the big hallway, where you will see Adelusion's hanging corpse in the distance; it is actually close to the exit point. Head through the hallway until you reach a torch, then turn left and go down this path to a room that holds the yellow skull key. There is a well-camouflaged switch on the left hand wall here, which lowers the key for you. Grab it, but watch out for monsters teleporting into the room.

Now return to the starting hallway and head all the way right and up to the door. Climb the stairs here up and take the yellow door to be above the room with the guillotine. There are a few revenants along the way to the switch you need to press at the end of this hall. Head back outside the yellow door to find the outside path is now open. Head all the way down this path to retrieve the red skull key. Now return to the hallway behind the blue door, and find either red door on the left wall past the path to the yellow key. Inside will be a revenant and a pillar with three switches on it. You only need to press the switch facing west to open the bars to the exit behind Adelusion's corpse. Watch out for the monsters at the exit (Hell knights on Hey, Not Too Rough or lower, barons of Hell on Hurt Me Plenty, and arch-viles on Ultra-Violence).

Once you are in the hallway past the blue door, head for the bend and look towards the left wall and you might see a piece of white rock that is lighter than the rest. This rock juts out a bit and acts as a switch. Press it to lower a lift near the torch in the hallway, which leads to various supplies and weapons.

South of Adelusion's corpse is a room where you can find a dead marine and a plasma gun in the corner. There is a mancubus in the middle and some pain elementals that emerge from the lava here. To get out, head onto the mancubus platform. 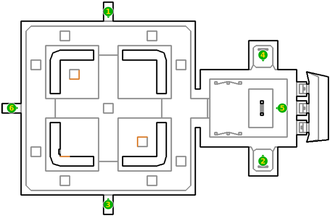 * The vertex count without the effect of node building is 2070.