MAP24: Quarry is the twenty-fourth map of TNT: Evilution. It was designed by Dean Johnson and uses the music track "Between Levels" from Doom II.

This map was also ported to PlayStation Final Doom as MAP22: Quarry. 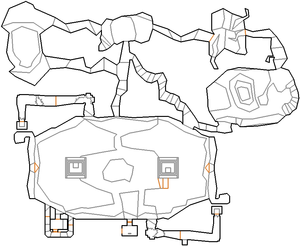 In the initial room, take the western tunnel. When you find yourself in the white colored cave, turn left and proceed south. In the outdoor area, go straight past the lava pool and take the way to your left (southeast). Enter inside. Quickly go to the deepest part of the cave and into the teleporter, as it soon will rise up again. This will bring you to the eastern tower. There, take the blue keycard.

Drop down to the second height level of the grounds, and open the exit door to the south. Flip the switch.

This map is easy to complete under UV speed and NM speed rules in under 20 seconds with the proper route. Upon starting the level, head to the cavernous room in the north, exit through the south, and enter the lava cavern in the southeast. Enter the teleporter that is lowered, and grab the blue keycard when the platform rises. Head down to the southern platform, open the blue key door, and flip the exit switch. The fastest demos using this route are Vincent Catalaá's 00:18 UV speed demo (ev24-018.zip) and his 00:19 NM speed demo (tn24-019.zip).

A highly unusual trick, however, allows the level to be finished in even less time. The sectors representing the teleporters in both the northwest and southeast caverns are marked as special damaging floors that hurt you even when you are in God mode, and end the level when your health drops below 11%. Such sectors are used in Doom's E1M8: Phobos Anomaly (at the end of the level) and The Plutonia Experiment's MAP11: Hunted (in the "wrong" exit). Normally, though, this would never occur since you would be teleported as soon as you step onto them. However, if you manage to skip over either one of the teleport linedefs, and your health is low enough, you can beat the level without even reaching the exit room. This trick was discovered by John Keniry in 2000, and was subsequently used in the current record-holding UV and NM speed runs. The quickest teleporter to do this with is the one in the northwest cavern.