MAP24: Rainbow Bridge is the twenty fourth map of Eternal Doom. It was designed by Chris Couleur. 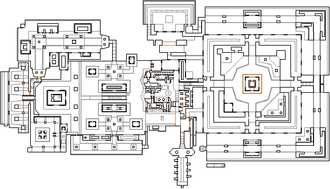 Map of Rainbow Bridge
Letters in italics refer to marked spots on the map. Sector, thing, and linedef numbers in boldface are secrets which count toward the end-of-level tally.

You will be now in another walkway with a berserk pack in the central column, a room with book shelves behind and two towers, to the left (east) and right (west). Head to the tower on the east and hit the 'X' mark to lower the floor. Kill the revenant, open the door and go through the teleporter. This teleporter takes you to the central building next to the four columns at the beginning. Go through the door on the east side of the building. At the back of the room, there is a lift that takes you to the top of the building, where the blue skull key is. Take it and step in the teleporter back to the tower.

There are also two flashing walls on the sides with 'X' marks. The northern one lowers the wall on the south side, giving access to another 'X' switch (which enables the stairs to the previously inaccessible door), guarded by a Hell knight. The southern one raises stairs to go back to where you were. Go through the now-accessible door, which leads to a big walkway around the last building of the level.