MAP24: Sorry, 66% Maximum is the twenty-fourth map of Cyberdreams. It was designed by Albert Valls (Vrooomer). 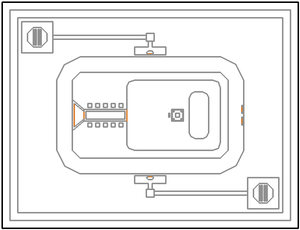 Map of Sorry, 66% Maximum
Letters in italics refer to marked spots on the map. Sector numbers in boldface are secrets which count toward the end-of-level tally.

There are three cyberdemons to contend with, one on the northwest platform, one on the southeast platform, and one in the middle. The north and south switches on the outer walkway will kill the cyberdemons on the outer platforms with crushers, while the switches on the east side will raise the bridge to the center. At the center, the central column will lower revealing Romero's Head. As the name of the map states, you can only get 66% maximum kills and must allow the central cyberdemon to shoot at Romero's Head to leave the level.

* The vertex count without the effect of node building is 262.