MAP24: Stair City is the twenty-fourth map of 32 in 24, a deathmatch megawad. It was designed by Nautilus and uses the music track "I Choose the Stairs," originally composed by Lee Jackson for Rise of the Triad.

It was the twenty-seventh map to be submitted, arriving somewhere between twenty and half hours and twenty-three hours into the session. As the map was not initially posted in the project's forum thread, the exact time can not be pinpointed. According to the author, the map took twenty minutes to build. 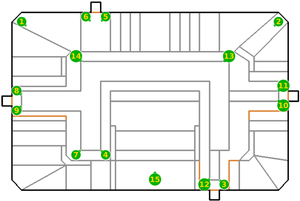 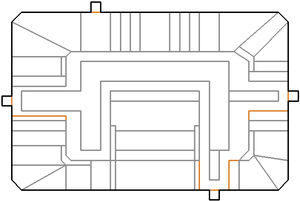 As suggested by its name, Stair City features multiple staircases, providing quite a lot of height variation to what is otherwise a very small map - a rounded rectangle of just 1792x1152 units.

There is another break near the south-east corner, and the short segment that covers that corner is where players can find a megaarmor. These southern segments of the staircase are quickly accessible by lifts, eliminating the need to run around the entire map to get back to them.

At ground level, the gaps in the staircase each contain two player spawns and a two-way teleporter in a small alcove that links to the opposite gap. The more central part of the ground level is textured predominantly with diamond lights, and at the bottom of the ledge that the BFG sits on, players can find a plasma gun and a soulsphere.

Additionally, rocket launchers can be found near the north-east and south-west corners of the staircase. Ammo for all weapons is in relatively low supply, though an energy cell pack can be found on the stairs near the south-east corner.

This level contains fifteen spawn points. This is tied with MAP32 for the most spawn points for a single map in the WAD. Most players spawn in close proximity to - but not on top of - a super shotgun.

* The vertex count without the effect of node building is 139.