MAP24: Terra Incognita is the twenty-fourth level of Plutonia: Revisited Community Project. It was designed by 4mer, who also modified the level's music track; un42, originally composed for Doom by Robert Prince. The par time defined in MAPINFO is 2:30. 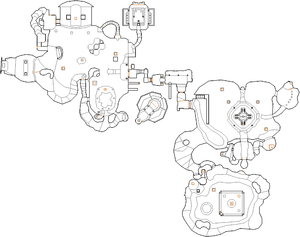 Map of Terra Incognita
Letters in italics refer to marked spots on the map. Sector, thing, and linedef numbers in boldface are secrets which count toward the end-of-level tally.

A few Hall of mirrors effects are present in this map.

* The vertex count without the effect of node building is 2331.

This level was inspired by The Final Frontier and Anti-Christ from Plutonia, Diehard from Memento Mori, and Post Mortem from Hell Revealed. The level was constructed in four weeks, using Doom Builder 2.