MAP24: The BloodStone Gardens of Hell is the twenty-fourth map of Perdition's Gate. It was designed by Mackey McCandlish (Avatar).

Plot: These areas are getting extremely complex. More integration areas lie beyond. You must sneak to the control centre before it's too late. 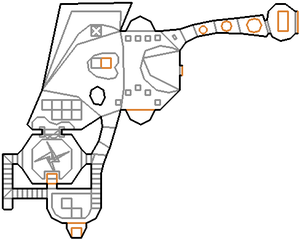 Map of The BloodStone Gardens of Hell
Letters in italics refer to marked spots on the map. Sector, thing, and linedef numbers in boldface are secrets which count toward the end-of-level tally.

The exit is immediately behind you blocked by yellow, red and blue bars.

To get the yellow key, which is right in front of you when you start in an alcove, press the switch immediately behind you to briefly lower the bars around it. Ride them up to grab the key.

To get the red key, head through the arch in the back left of the start room, where you can see the key on a raised pedestal, and take either set up stairs upward. At the top you will come to a small hole and a teleporter. Drop down the hole to land on the red key.

The blue key is on the raised platform in front of you when you start. To get it head go through the arch in the back left corner of the start room and head up the stairs on either side of the room beyond. At the stop you will find a small room with a teleporter and a hole. Head into the teleporter to be taken to the ledge surrounding the right side of the start room. From here you can jump off and land on the platform the blue key sits on.

Monsters will teleport into the start room after a short delay, every time you pick up a key. With all three keys, open the bars and exit. Though note that the blood floor in this corridor hurts.

On the red key podium is a trigger that lowers the bars around the yellow key. This trigger is seemingly unneeded as there is a switch right next to said bars.

You can jump on top of the bars around the yellow key from the chaingun ledge if you do not wish to press the switch to lower the bars.

* The vertex count without the effect of node building is 393.