MAP24: The Final Frontier is the twenty-fourth map of The Plutonia Experiment. It was designed by Milo Casali and uses the music track "In the Dark" from Doom II (the same as Doom II's MAP24: The Chasm). The level's texture and architecture theme shows similarities to MAP29: The Living End from Doom II. Its name is a reference to the opening line in various older "Star Trek" television shows. 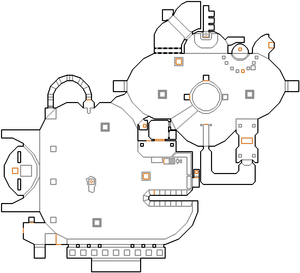 Map of The Final Frontier
Letters in italics refer to marked spots on the map. Sector, thing, and linedef numbers in boldface are secrets which count toward the end-of-level tally.

Activate the switch in front of you at the start, and you will be lowered into the northern end of a large room. Walk on top of the set of pillars and enter the teleporter at the top. Travel along the walkway and make a jump towards a large circular platform. Activate both switches and wait for a long walkway to rise to the southwest. Be careful for the pain elementals, cacodemons and arch-viles.

When the walkway has risen, walk towards a small room, and you will be in the northern end of another very large room. Activate a switch that is located at the entrance to raise the walkway around the bend in the east, and collect some rocket boxes which will be useful in fighting the cyberdemon located far away on a platform on the western end as well as other enemies. After that, run along the way until you arrive at a lift on the southern end of the room.

You will be in a small room with a blue panel and a switch. Activate the switch, and a door will open on the northwest corner of the large room. Drop down to the blood pool and go inside that room, climb the steps, get the blue keycard and return to the blue panel room. Enter it and you will be transported to the cyberdemon platform. Re-enter the teleporter and exit the level.