MAP24: The Gift From GOTT is the twenty-fourth map of Kama Sutra. It was designed by Jakub Razák and uses the music track "The Unforgiven" by Metallica, sequenced to MIDI.

Method's first map including some mixed features. He made the map you have to play cautiously and when you don't have guns or enough ammo (like at the start) you just have to find another strategy to mop up all monsters because you don't have a chance to run away to some safe place. Because there is no safe place prepared for you. It's not so common in KS. 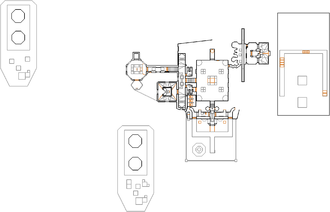 Map of The Gift From GOTT, cropped to only show the playable area
Letters in italics refer to marked spots on the map. Sector numbers in boldface are secrets which count toward the end-of-level tally.

* The vertex count without the effect of node building is 1940.