MAP24: The Haunting (called Residence Quarters on the TeamTNT website, and Residence Quarters -- The Haunting on the official secrets page) is the twenty-fourth level of Icarus: Alien Vanguard. The level is set within the residence quarters of the exploration cruiser, Icarus, as well as in entertainment facilities on the ship, including a nightclub and a movie theater. It was designed by Gary Gosson, and uses the music track "Ghost in the Machine" by David "Tolwyn" Shaw. It is one of a few Doom II levels which feature intentional ghost monsters, created by having an Arch-Vile resurrect a monster who has been crushed. 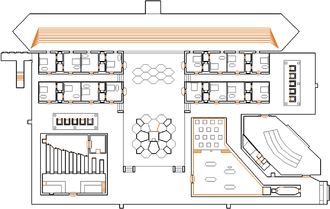 Map of The Haunting
Letters in italics refer to marked spots on the map. Sector numbers in boldface are secrets which count toward the end-of-level tally.

Press the switch at the beginning to lower the wall. You will see a gallery of Doom shots, turn right from there to proceed with the map. Your first order of business is to head into the southwestern building. This is a shooting range. To get the yellow key in this room, flip the switch to the southeast to reveal the first target. You need to shoot each target to open the next one, but there is a catch. You need to shoot the bulls-eye of each target to open the next one. If you are off slightly, the other ones will close up and you will have to start all over again. Each target is progressively more distant than the one before it. While you are doing this, there is a lost soul in the second target range which might distract you, plus some ghost zombies will emerge and harass you. Fend off everyone you can, and shoot the targets (use the pistol for this). When you successfully hit all of the bulls-eyes, the column behind you will open and you can get the yellow keycard.

Leave the building after that, and go just north of it to spot five small doors. There is a similar set of five doors in the northeast part of the map, if for some reason you wish to head there. Open the one with yellow bars around it to teleport into a sector with a revenant. The door here leads to an arch-vile and a switch. After pressing the switch, leave the area and head for the building just east of the shooting range. This is the nightclub, and the blue key will be on one of the tables. Kill the monsters on the dance floor, and if you pressed the switch before, there is a step you can take that leads to the table with the blue key. Go back to the area with five teleporters, but look out for ghost monsters when you leave though. Take the one with blue bars around it and kill the arch-vile on top of the hive-like structure. There is a soul sphere and a switch here, make sure you press this switch. Then press on the wall to the left of the switch to leave the structure.

The theater area is the last place you need to go, and its entrance is right by the level exit, which is in the far southeast corner. Enter the theater and there should be a door in the back. Take it and take the lift up and get the red keycard. Look out as you try to leave because you will be close to an arch-vile resurrecting several ghost monsters. Leave via the north exit and go back to the "PLANET EXIT" in the southeast corner. Press the panel that is furthest from the right to leave the map.

Each of the residence quarters on the northwest and northeast corner of the map have various monsters and items inside of them.

In the middle of the map, you can climb the hexagonal steps to the north to gain a megasphere. Look out for plasma projectiles coming from the space to the north (an arachnotron is hiding behind a fake wall there).

As with many other levels in Icarus that have "teleporter" or "begin simulation" exits, a death slide can be performed on this level in the exit hall. It can be performed blasting yourself off the red computer panels using the rocket launcher, with your back facing the teleporter. Your corpse will slide under the barrier and into the teleporter, ending the level. As you are given a rocket launcher at the very beginning of the level, and there are no hellspawn blocking your path to the exit, a time under half a minute is very easy to obtain in this fashion, even on Nightmare difficulty.

* The vertex count without the effect of node building is 1837.