MAP24: The Inmost Dens III is the twenty-fourth map of Hell Revealed II. It was designed by Sam Woodman and Andy Olivera and uses the music track "Last Wish," by Petter Mårtensen (Thyrbse). 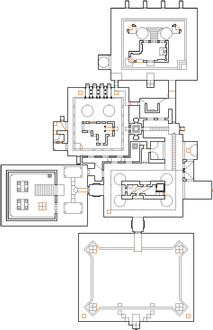 Map of The Inmost Dens III
Letters in italics refer to marked spots on the map. Sector, thing, and linedef numbers in boldface are secrets which count toward the end-of-level tally.

Get rid of whatever monsters you can at the start. Enter the building and dispatch the chaingunners, then press the skull switch inside. This raises a lift in the southwest corner which you can use. Ride it up and jump west. Open the door and take the lift down to a tiny room with an arachnotron. Flip the switch in this room, and then take the nearby teleporter to appear in the yard again. Reenter the chaingunners' house and then you can use the lift to go up and then jump east, watching out for the arch-vile. Across, there will be chaingunners in the interior section to your left and cacodemons in the moat at the bottom, so be careful while crossing. The next bridge here requires the blue key, so head inside for now. Look for a lighted portion of the room with medikits and you will find Hell knights guarding a switch. Flip it to lower the lift that the mancubus was standing on. You will have a lot of enemies to contend with in the blue key area including imps, spectres, mancubi, revenants, arch-viles, chaingunners, Hell knights, and the cyberdemon. When done with the monsters, head inside the building. If you grab the plasma gun, an arch-vile teleports in while a wall with pain elementals opens up. Jump south from the building to the cyberdemon's platform and you will acquire the blue skull key.

Return to the bridge that required the blue key and open the blue door for a berserk pack and the switch to lower the barrier. As you cross the bridge, look out when the walls nearby open up, because chaingunners will attack you from there. Keep going to the rectangular walkway with mancubi on it. Enter the building in the middle and deal with the chaingunners and arch-vile inside. The red skull key is in this building, pick it up but look out for another arch-vile that appears. There is a red door in this building, and it was right next to where you picked up the key. Enter and flip the switch inside, lowering the barriers across the moat there. Leave the building then head to its western side, making a running jump to get across. You will find a branching path with mancubi on both sides. Kill them and take the left one, then jump west to the library section. Kill all the enemies present here, and when you pick up the yellow skull key you will have a duel with a cyberdemon at the top of the large stair set.

Jump out of the library section once you have killed the cyberdemon and return to the rectangular walkway. Going back inside, kill the arch-vile and any resurrected chaingunners, then attempt to open the yellow key door. The door will not open, but if you go outside, a cage filled with cacodemons will be open. Behind the cacodemons is a switch you can shoot. When you manage to shoot it, head back inside and the yellow key door should be open. Flip the switch to lower the southern yellow skull barriers so you can access the final area. In the open field, you will fight four cyberdemons in the four corners of the room, and in order to exit the level, you must step on each of the pentagram platforms that they were standing on. Doing this will raise some ledges so you can reach the exit teleporter.

Raise the lift in the southwest corner of the starting yard and jump west. Open the door and take the lift down. In the tiny room with an arachnotron, if you press on the northwest wall, it will lower and you will get a box of bullets.

Inside the red skull key building, open the northern door and flip the switch (you actually do not need the red key to do any of this). The switch lowers barriers to the north. Get out of the building and make a running jump to this area that you opened. You will then reach one of the chaingunners' cages, where you can get a soul sphere and loads of rocket boxes.

Just before the library section, if you take the path forking right and jump eastward, you can head down the hall to get a BFG9000.

Inside the library at the southwestern part of the map, you can climb the ladder up onto the bookshelves, then walk around to get a megasphere.

* The vertex count without the effect of node building is 1778.