MAP24: The Mucus Flow is the twenty-fourth map of Community Chest 2. It was designed by B.P.R.D, and uses a music track composed by him. It is notorious as the hardest level in the megawad, and is also impossible to complete in Boom as the result of a design flaw (see Bugs).

The level is set in a rocky outdoor area, with a river of green mucus flowing through it, and within a techbase flooded by the substance. There is no health or ammo to be found on the way, other than within small depots scattered throughout the level, most of which require a well-guarded key to access.

The Mucus Flow was featured in Doomworld's Top 100 Most Memorable Maps, placing 3rd. 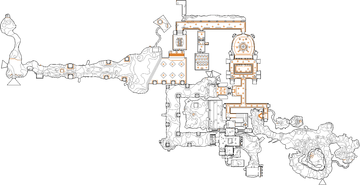 Map of The Mucus Flow
Letters in italics refer to marked spots on the map. Sector, thing, and linedef numbers in boldface are secrets which count toward the end-of-level tally.

The large shack behind your starting point is of vital importance, as supplies are extremely scarce in this level bar this one shack. Whenever you need health or ammo, you will need to come back here. If you went for the valley that houses the red key, then you need to be wary of a monster in this shack (an arch-vile on Ultra-Violence, for example) The switches on the eastern side house weapons, and three of them are colored key switches, so you need to hunt for keys to get them. In a technical sense, you will not need any keys if all you want to do is get through the level, but they are vital if you wish to survive through to the end. From the start, go west, through the building and keep going west through the valley. Ignore the tower guard zombies, as they will respawn and you will not have enough ammo to kill all of them. Pass through until you hit a fork, you will have a few options at this point:

To get the red key, head right and then left at the next fork, and then go through the next valley. There is a health shack here if you need it. Be wary about your health and ammo, and watch out because some enemies may come through the slime falls. When you reach a large slimefall which seems to be a dead end, look for where the rock juts out and you will see part of the slime fall is misaligned. This is an opening so you can continue through the valley. Keep climbing and you will eventually find the key.

If you are heading for the blue key, head right at the fork and then right again, following the path. You will enter an area with a cage to your right and nukage on the floor. There is an opening through the slimefall where you can reach the lift. Enter through to the big area and climb onto the little crates into the valley here to get the key. Climb the stairs to get back out.

If you are heading for the yellow key, head left at the fork. Take either path and hit the switch to reveal an area behind you with a fountain. Be extra careful here, as chaingunner closets will appear in the walls after you move over some linedef, and some demons will come from behind. The switch near the door opens it into the next hallway. Take the first door on your left. Here there are some areas where if you cross the blue lines, imps will teleport. The yellow key has a lot of monster teleports, some of them are mancubi.

If you are just getting out, take the yellow key path, but keep going down the long hallway, through the next room into the next valley. You will have to traverse this long valley until a long lift, then continue through the upper reaches of the valley. There is a health shack at the bottom of the valley, and an ammo shack (guarded by revenants) a bit past the elevator. You need the red and the yellow keys, respectively, to open them. Crossing the blue line near the pads will cause revenants to teleport in. You will reach what eventually is another dead end, but go through the slimefall to find another switch here. Pressing it floods the valley with nukage. Now go back all the way to the entrance of this valley until you find an opening close to where the health shack was (also take note that the health will be openly available if you have not picked it up yet. Go through this winding road and exit by approaching the column with the stars on it.

Linedef 9094 (the switch opening the four doors outside at the north of the map) is located closely behind four linedefs (9956, 9957, 9958, 9959) that are of type 48 (animated wall, scrolls left) but are not set as PassThru. Thus, the switch cannot be activated, rendering the level impossible to finish, unless you are playing in ZDoom, or the noclip cheat is used. Users of PrBoom+ can activate "Use passes thru all special lines" in order to reach the switch.

On skill 2 or lower, the landing spot for the teleporter in secret #2 does not exist, making the secret impossible to leave.

Because five of the secrets cannot be reached, with two of them unreachable because of a similar bug to the above, you can only obtain 37% Secrets on this level. With the issue corrected and those two secrets reachable, only 62% is possible.

* The vertex count without the effect of node building is 12235.