MAP24: The One God is the twenty-fourth and final map of 1 Monster. It was designed by Robert Eckhardt (Ichor) and uses the music track "Confrontation with the Great Enemy" from Lufia: Curse of the Sinistrals.

Like all maps in the megawad, the map features only one type of monster, in this case Romero's head. Far from a classic Icon of Sin map, the level forces the player to run a gantlet of lethal traps, all within a tight time limit. 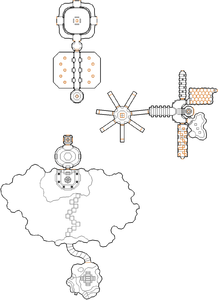 Map of The One God
Letters in italics refer to marked spots on the map. Sector, thing, and linedef numbers in boldface are secrets which count toward the end-of-level tally.

The beginning says "Run!" and this warning should be heeded, as the player will die in approximately 165 (Easy), 150 (Medium) or 135 (Hard) seconds if he does not complete the map in time. The count starts when you go past four stalagmite things. Head forward and up the stairs until you come through the teleporter. You will find yourself in a place with several doors, all of which but one are a death trap. The correct door is the easternmost one (the second door, counting clockwise from the top).

Proceed forward and you will find yourself in a hall with two pairs of wooden doors, one to the north and one to the south. The two pairs can be tackled in any order.

Open the door adorned with skulls. As you proceed forward, crushers will lower from the ceiling. There are two sets of crushers; the ones above the metal pillars take longer to lower and rise. Your best bet is to enter the room and quickly hide beside the third metal pillar, then as soon as your way is clear, run forward to the switch. Press it and go back, once again quickly hiding beside the third pillar from the north and speeding forward as soon as the crusher ahead rises.

Now the door with the lion motif is open. Inside is a room divided into several hexagonal regions. Once you step on a hexagon, another adjacent one will light up briefly to show where you have to go next. If you cross onto a wrong hexagon, you will die. Make it to the end of the room, press the lion switch and leave the same way.

Open the door adorned with skulls and make it to the end of the room without stepping on any of the painted squares on the floor; a misstep will cause instant death. Press the skull switch and leave.

Now the door with the lion motif is open. Inside is a rocky ledge, but as soon as you step onto it, a crusher will be activated. Wait for it to lower completely and then rise, and as soon as the crusher is just barely above your head, straferun along the ledge towards the lion switch. Press the switch, jump into lava and leave via the stairs.

With both lion switches pressed, now you can access the final room. Walk into the newly opened passage and enter the teleporter. Go forward until you come to a circular room; through the window you see a number of fleshy walls, which shield Romero's head. Pressing a blue skull switch will temporarily lower a wall - but one to the side, not one in front of you. As soon as you press a switch, you have to immediately straferun under the crusher next to it into the next part of the room. The timing of the crushers is very unforgiving, so be careful not to bump into walls. Once you make it past the crusher, quickly shoot Romero before the wall rises again. Keep doing this until the boss dies.

In front of the first building is a heptagon with a single candle near one of the sides. It is a clue as to which of the seven doors after the first teleporter is the safe one.

Since the level contains no secrets or actual monsters, the UV max, NM100S, UV -fast, and UV -respawn categories are redundant. Additionally, as the level requires you to kill Romero's head, UV pacifist is not possible on this map.

* The vertex count without the effect of node building is 3008.