MAP24: Tough Skin River is the twenty-fourth and final level of the first episode of Back to Saturn X. It was designed by Tango, and uses the music track "Within Reach" by James Paddock. The par time is 11:00. In the official add-on version, this level's name is Within Reach, taken from its track title. 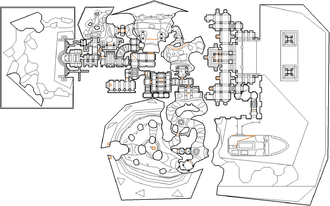 Map of Tough Skin River
Letters in italics refer to marked spots on the map. Sector, thing, and linedef numbers in boldface are secrets which count toward the end-of-level tally.

Collect the shotgun and kill any monsters ahead, then go round the corner to lower the right-hand wall and reveal zombies, imps and demons (plus a Hell knight on Hurt Me Plenty (HMP) skill level or higher). Open the wide door at the end of the passage and head straight forward to a river, which will cause a knight and cacodemons to appear ahead, then follow the river west to a yellow key door before turning left to drop down a hole. Take the super shotgun in front of you, turn right then head down some steps to confront two knights (or arachnotrons on HMP or higher) who are guarding the entrance to a room made of blocks. Head west through the room to a doorway and go round the next corner to see a pillar rise to block the way out, then fight off a horde of imps that teleport in before pressing an arrow button next to the pillar; after doing so, go to the east end of the room and press a second button that has been revealed to open the way out of the room.

Leave the room through the west entrance and head straight forward at the junction, turn left to enter a chamber with shotgun guys and/or chaingunners, then press the arrow button in the alcove ahead to lower a lift behind you with more chaingunners. Ride the lift up to a room with some more enemies then head west until you reach a rocket launcher which is guarded by cacodemons (plus an arch-vile on HMP or higher). Press the button in the depression in the north-east corner to open a vent on the south wall, ride the neighboring lift up then run into the vent you just opened and follow this to get outside to a narrow ledge. Follow the ledge past a knight and two chaingunners to enter another vent and navigate it until you reach a box of shotgun shells; from here you can drop down a hole to get back to the button that operates the large lift. Return to the junction you passed through earlier and head east to see the yellow keycard ahead - watch out for cacodemons that teleport in when you pick it up.

Drop to the ground below, then press the arrow button next to the lift in the east wall to activate it. Ride the lift up and open the yellow key door ahead to confront two spectres (or two revenants on Ultra-Violence and Nightmare), then open a second door straight ahead to find yourself back at the river. Head upriver this time to enter a tunnel, then follow the tunnel until you reach an open area where two or four mancubi will rise from the water to defend a super shotgun. Open the yellow key door at the south end to reach a junction with a mancubus, then open another door on your left and head straight forward to drop into a cave with imps - the red "LOCK" panel here will allow you to get out once you have the red key. Follow either path next to the panel until you drop down to a junction with a red torch, then continue south through some vines to drop down a tall waterfall and land in another cavern with several mancubi. Make your way to the west side to find a plasma gun and supercharge in front of a crucifix button and push it to lower the wooden walls in the center, revealing the red keycard along with a megasphere and lots of ammo. Prepare yourself before picking up the key as it will allow a horde of cacodemons, imps, demons, mancubi, revenants, arch-viles and one or two cyberdemons to teleport in - you must fight them off while waiting for the metal wall in the south-east corner to lower and reveal an exit.

Once the aforementioned wall has lowered, go through it and press another crucifix button here to lower a lift that leads back up to the top of the waterfall. Push past some imps and follow the river until you see a trail of candles leading into a narrow tunnel, which you can follow to get back to the top level, then return to the "LOCK" panel you passed earlier and press it to reveal a button that will raise a pillar behind you, which you can use like a lift to get back up to the junction you passed through earlier. Open the west door (requiring the red key) and kill a waiting mancubus along with some imps, then drop into the trench running through the room and turn left to see two cacodemons (plus two knights on HMP or higher) guarding a chamber with a button. Press the button to raise a bridge inside the trench, then press that bridge to lower it and kill a waiting arch-vile before riding the bridge up to the blue keycard.

Open the door next to the blue key to slay some lost souls (or two pain elementals on HMP or higher), then activate the lift behind them to find a door leading back to the starting point. Open the blue key door on the west side of the room and turn right to see a teleporter, which will take you to a tiled hallway, then head down some steps to your left to get outside where a few spectres are waiting. Head all the way south to another staircase and climb it to see another teleporter ahead, step on it and kill an approaching demon before walking straight forward to a third teleporter; after using that teleporter, kill another demon ahead then go straight forward into a fourth teleporter to reach the room at the center of this area. Arm yourself then press the arrow button in front of you, which will lower several walls ahead to reveal two or four arch-viles that will teleport elsewhere; you will also need to contend with a pack of mancubi that teleport in.

Fight your way to the teleporter pad at the north end of this area to see that a door has opened revealing a button, which will open a second door at the south end hiding another button. After pressing the second button, go down the stairs behind you and turn right to see that a new path has been revealed which leads to a lift. Ride the lift up and board the ship ahead of you, which will begin to sink into the sea below - the water is highly damaging, and when you reach 1% health the level will automatically end.

* The vertex count without the effect of node building is 5491.