MAP24: Ultimate Hatred is the twenty-fourth map of Whispers of Satan. It was designed by Paul Corfiatis, who also wrote the music track for this level, "Rock Wars". 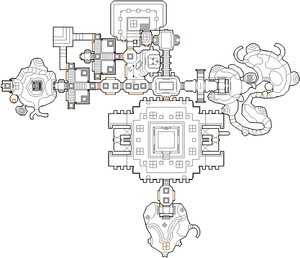 Map of Ultimate Hatred
Letters in italics refer to marked spots on the map. Sector, thing, and linedef numbers in boldface are secrets which count toward the end-of-level tally.

Press the switch on your left to raise the stairs, then enter the blood pool and another switch appears in front of you. It opens a door to your left, so head through this hallway, and hit the switch to lower the lift into a cavern. There is a single path you have to take, so take it, avoiding the blood pool and the crushers, and killing monsters along the way until you reach a switch. Pressing it reveals a number of monsters, but also opens up the other door at the blood pool near the start. Go back there and take that door. There will be a caged area where you will see the three keys on the three pillars. There are different paths to reach each one.

Red Key: Open the door to the north into an outdoor area and climb the steps up to the ledge. Flip the switch at the end of the ledge to reveal a bridge to the door, and enter it to get to the red switch.

Yellow Key: Head for the western door in the northwest, and in this area, press the two switches to the southwest to remove the two sets of bars to the switch. Press the switch to lower the key.

Blue Key: Head for the door to the southwest, and do the same thing as you did with the yellow key path. Except this time you will open a door leading to a small cave. Pick up the armor bonuses as you ascend the rocky stairs. There will be an arch-vile in a cage here once you press the lion switch on the pentagram. Use him to jump up to the platform that has the blue key switch. If you accidentally kill him or you do not want to lose health, you can open Secret #2 to teleport onto the blue switch platform.

When you get all the switches, go back to the key room and claim your keys, then head back to the central blood pool. Open the three-key door behind the blood pool switch to enter an arena. Kill the enemies present and climb the steps to the central platform only for a spider mastermind to appear directly in front of you. Kill it and press the switch to reveal two side compartments with lost souls and switches in them. Shoot these two switches, and watch out because an ensuing ambush will occur with imps, demons, and arachnotrons. The exit door to the south will be open. Go through it towards the lift (looking out for the arch-vile) and press the switch to lower into a lava-filled area where the exit is located. 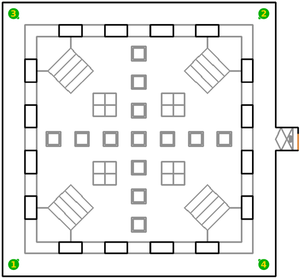 * The vertex count without the effect of node building is 4020.