MAP24: Zyklon B is the twenty-fourth map of Congestion 1024. It was designed by Justin Nagy (Stealthy Ivan) and uses the music track " ". 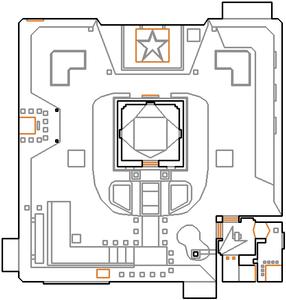 Map of Zyklon B
Letters in italics refer to marked spots on the map. Sector numbers in boldface are secrets which count toward the end-of-level tally.

At the start, open the door and follow the path to drop down near a nukage fountain. Move north and turn right into a passage behind the starting building to find a switch on your right. Flip it and retrace your steps to the nukage fountain, as you do so you should spot a now accessible opening on the right. Take it and collect the red key at the end. Return to the passage behind the starting building and continue forward. Turn right at the end to find two doors. Open either of them, open the red bars and press the switch behind them. Ride the lift to the right of the doors up and enter the teleporter to the right. Grab the blue key in front of you, then drop down to your right and use the switch to your right as well. Turn around to find the exit teleporter is now accessible in front of you.

When exiting the starting room, the southern-most rocket is placed too close to a narrow pillar, and cannot be picked up.