MAP25: Acid Reflux is the twenty-fifth map of 2048 Unleashed. It was designed by Baphomet and uses the music track "K. Rool battle theme" from Donkey Kong Country 3. 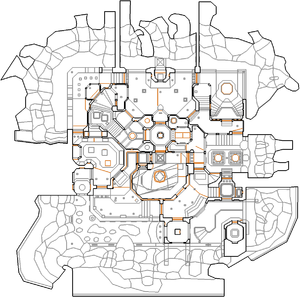 Map of Acid Reflux
Letters in italics refer to marked spots on the map. Sector, thing, and linedef numbers in boldface are secrets which count toward the end-of-level tally.

Take the chainsaw and backpack then kill the zombieman blocking your path and go through the door to collect a shotgun. Kill the zombiemen on the ledge above then turn round and press the switch behind you to open the door above, which will reveal two to four spectres. Go through this door and collect an armor then turn left to climb the stairs, which will drop away; kill the spectre (or Hell knight on Hurt Me Plenty (HMP) skill level or higher) that is revealed behind you and press the switch it was guarding to raise the stairs again and go up them to a room with three doors, two green and one silver. Watch out for a revenant that appears on an elevated ledge as you cross the room.

Open the southern green door to find a demon and one or two revenants standing on a lift, then step through and flip the switch on the central column to be carried down to a nukage trench which is overlooked by numerous monsters including two mancubi and an arachnotron. Follow the trench round a corner to a chaingun (passing a pillar holding the blue keycard on the way) then kill a chaingunner and flip the switch next to it. Backtrack to the room with three doors and open the western green door this time, kill any demons and zombies waiting behind it then follow the passage to another door leading to a room with crates.

Slay two approaching demons then approach the crates, kill the shotgun guys that are revealed on the walkway above then look behind the middle crate (with a berserk pack on it) to find a switch that will raise a set of gray steps. Climb the steps and kill a revenant waiting at the top, flip the switch it was guarding then go back down the steps and head through the now-open door on your right. Kill a waiting knight and flip the switch next to it, then drop to the nukage trench below and flip another switch that has been revealed in the west wall. This will lower the pillar holding the blue key so you can collect it.

Backtrack to the room with three doors (killing a mancubus blocking the way) and go through the silver door, which leads to the nukage pit at the center of the level. Turn left and follow the walkway round (ignore the switches on the south wall for now) and flip the switch next to some blue bars to open them, step through and kill a knight (or baron of Hell on HMP or higher) that appears in front of you then go through the door on your left to confront some chaingunners. Turn left and approach the super shotgun in front of you, which will cause a switch to rise from the ground; press it then go through the door behind you to reach the walkway overlooking the crate room. Follow the walkway round until you see a set of bars rise in front of you to block your path, then turn left and drop down to a switch that has been revealed by the gray steps you climbed earlier.

Press the switch and kill some imps and demons that teleport in then retrace your steps to get back on the walkway above the crate room, passing two mancubi on the way. Follow the walkway all the way round this time and open the door at the end to reach a passage with a curved nukage pit that is overlooked by chaingunners and imps. As you approach the pit a series of small platforms will start to rise and fall at regular intervals; step across them to reach the other side of the pit and kill two waiting imps, then press the lift on your right to lower it and ride the lift up to a switch. Pressing the switch will lower another lift on the south side of the pit for a few seconds; time it so you can run back across the platforms before they lower, step on the second lift and press the switch above it. This will raise a set of steps by the first lift leading up to a door.

Go through the door and kill some imps then head east towards another door; as you approach it, both exits from the room will be barred and you will need to slay some imps as well as two knights (replaced with mancubi and a baron on HMP or higher). Once the bars have lowered (which takes about 30 seconds) go through the east door and kill the mancubus and other monsters waiting in the next room, then climb the steps and open the door at the top to face two shotgun guys and knights. Go through the next door on your left to see the yellow keycard on a pillar between two translucent nukage-falls; kill the mancubi that appear inside the nukage-falls then open the tan door in the south-west corner, climb up the steps behind it and head through another door at the top.

Head forward past a door with some red key markers above it then turn left to see three imps guarding two switches. Press the west switch and kill two knights which have appeared behind you, then go back to the yellow key area to find that the pillar holding the key has lowered so you can collect it. Watch out for some cacodemons that have also appeared in the area and can ambush you from above.

Go back to the switch that lowered the yellow key pillar and press the switch next to it, which will raise a bridge with an arch-vile and then open the yellow bars on either side after a short delay. Step across the bridge to a blue elevator then go straight forward to another door, open it and kill two imps (plus a demon on HMP or higher) waiting behind. There is a switch on the south-west wall - flip it to reveal another switch on the north wall and cause some cacodemons, chaingunners and a baron to teleport in from the nukage-fall in the middle of the room. Flip the second switch to reveal a third switch on the south wall, which will raise a set of steps leading up to one or more mancubi.

Turn right at the top of the steps and go through a small door then turn left and flip the switch ahead of you - this will open the door you can see through the window, allowing you to pass through it and drop down to the red keycard. Wait for the floor to rise so you can leave, then go down the steps to confront some imps and demons followed by a knight and revenant. Backtrack across the bridge between the yellow bars, turn right and right again to go through the door with red key markers above it (leading to the nukage pit in the center of the level) then kill a waiting baron and flip the switch on the right-hand wall to open some red bars ahead. Pass the bars and follow the walkway round to the three switches on the south wall and flip all of them.

The nukage-fall in the middle of the room will recede, revealing a cross-shaped platform that is moving up and down; kill the arch-vile that appears then time your run across the platform to reach the door under the lattice bridge. Go through it and press the switch on your right to lower the central elevator to the bottom floor then press the switch on the central column which will make the elevator go up to the top floor. Open the door at the top floor (under an exit sign) and kill an arch-vile waiting behind it then press the switch it was guarding - this will lower the floor and take you down to the northern courtyard, where you will have to contend with a cyberdemon as well as revenants and chaingunners. Take the megasphere behind the switch you just pressed to help you.

An armor can be found inside the nukage-fall in the north-east corner of the level.

* The vertex count without the effect of node building is 4753.

This level makes extensive use of control sectors and voodoo doll conveyors to achieve many of the level's effects, such as the rising and falling platforms in the north-west corner of the level and the platforms surrounding the exit door.