MAP25: Another Fine Mess is the twenty-fifth level of Icarus: Alien Vanguard. It is set in a canyon on Beta Pictoris 3, and was designed by Michael Bristol.

The level shares its name with a 1930 film starring Laurel and Hardy. 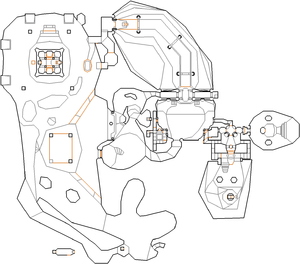 Map of Another Fine Mess
Letters in italics refer to marked spots on the map. Sector numbers in boldface are secrets which count toward the end-of-level tally.

You will get the red key at the very beginning, so take it. Head all the way down the valley to the building that is to the north. Climb the steps to the porch, looking out for caged arachnotrons behind you, and take the teleporter on the western side. You will be inside the building with pitch black walls. In front of you is a cacodemon on Ultra-Violence or higher or a pain elemental on the lower skill levels, as well as a target. Make sure to shoot the target, as it opens the walls with lost souls in them. Open the walls to the east of the lost soul walls to reveal demons, and then get the armor to reveal spectres. Flip the switch behind the light amplification visor and exit through the teleporter you came out of. Two more cages will be open, plus an area to the southeast is revealed. Head through this area, and head for the torch with dead bodies around it. Open the rocky wall east of it, and head into the blood pool. Head north, then east from there to retrieve the blue keycard. The switch here opens a wall nearby, but it is not necessary. Head eastward into a large, open area, and climb the western steps towards a blue switch. Hit it to open a passage. Head all the way down and hit the switch at the end (looking out for the pain elemental as well) to open some doors. The northeast floor will rise so you can leave this small area, and back into the open field. Now take the eastern steps and go through the open passage grabbing a super shotgun. At the end of the passage, attempting to press the switch causes the floor to lower with imps and a spectre surrounding you. Press the lion switch here to open a northwest passage. Press the switch in that room and you will open some stairs. Go down them to an open field with several enemies. Press the skull switch on the red column in this area, then return and head northeast. In the next cavern-like area, there is a switch in the lava. Press it and return to the small room, this time going southwest, heading upstairs. The metal column reveals a baron of Hell. Head towards the lion switch to the left and the area around you will start to move. Head through the southeast passage; this time the stairs will lead upwards, so take them all the way up until you reach a skull switch. Press it to raise a small bridge leading to the skull doors. Take them back outside and you will see a bridge has been created leading north.

Take the yellow key along the path and look out for monsters attacking from several directions. Open the yellow bar at the end of the path and use the switch for a lift upwards. At the fork, head right to a switch and press it. This will lower a rock column in the area with the building. Go to the other branch at the fork to get an invulnerability and a backpack, then head onto this lowered rock column for it to rise up. From there, get the BFG9000 and jump onto the white rocks all the way until you reach the exit teleporter, but look out for the monsters including arch-viles, arachnotrons, and a cyberdemon who hangs around the exit walkway. When you teleport, press the panel on the far right to leave.

It is possible to get trapped in the area with pitch black walls if played on Ultra-Violence or higher. After teleporting to the area the player is standing on a teleporter pad (sector 334), facing a cacodemon and a shooting target. If hitscan weapons are used (pistol, shotgun or chaingun are available up to this point), two walls (sectors 338 and 341) will open, enabling further progress. Nevertheless, if the player uses the plasma rifle against the cacodemon and then makes a step forward, he will fall into an inescapable, 25-unit high pit. From there, the only way to open the walls is to shoot the target with the super shotgun, but this weapon is missing in the area on skill levels 4 and 5.