MAP25: Baron's Den is the twenty-fifth map of TNT: Evilution. It was designed by David J. Hill and uses the music track "DOOM" from Doom II. 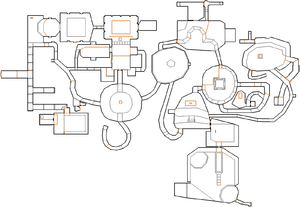 Map of Baron's Den
Letters in italics refer to marked spots on the map. Sector, thing, and linedef numbers in boldface are secrets which count toward the end-of-level tally.

Follow the tunnel until you come to an open area (you may hear a fast door opening sound, which is actually a metal block that only opens in single player and cooperative game modes). In that area, turn right and take a similar tunnel which leads you to a lava room. You can obtain a plasma gun here (sometimes, it can be difficult, so use straferunning). Head to the north tunnel. Open the metal door to a cave with long staircase. Climb it being cautious, as there are several traps around one of which will open unexpectedly. When you reach the top, open the lion panel leading to a cave with another staircase. Go down on it and enter a tunnel turning right to the east. You will be trapped here by red skull bars, so you will need to find another way out. Go straight until you can turn right (a former sergeant should see you). Descend until you can see a baron marble art. Right here there is a fake wall to your right. Go through it to enter a watery cave with two sergeants and the red skull key. Take the key.

Leave the watery cave now and prepare for a fight: the baron marble concealed two more sergeants and a revenant on Hurt Me Plenty and higher. When you dispatch them or simply run away, ascend the stairs back. Since the red skull bars have blocked your way and you cannot unlock them even with the correct key, you have to find another way. Turn right and follow the linear way to the staircase cave. Prepare for another fight here. Chaingunner, sergeant, if you did not kill them and recent cacodemons should appear here. Once you deal with them, find the way back to the beginning of the level. You can either go via the lava room with the staircase and then to the first lava room or you can open a metal door to the west here. This will lead you to a cave with a lava river at the bottom. To get to the other side, lower the column as a lift and step over it and you will be teleported to the other side. Walk upstairs and open a metal door to the southwest. Follow the tunnel towards the familiar lava room, and then follow the southwestern tunnel back towards the beginning.

Drop to the pit in the beginning of the level. Take the super shotgun and open a lion panel. In the next room, from the left of you, the sergeants will attack. In the room where they are now, there is also a security armor. However, if you decide to take it, a trap will open along with another trap on the other side of the room. But you can obtain a rocket launcher. Come closer to the marble wall to the north. It will open revealing a large room. In this room, you need to enter a wall to the west. Note this is not opened by hand. So, to open, step onto the middle of the room that is lightened by ceiling lamps. Turn to face the aforementioned wall. Standing under the lamps go to it and it will open. Push the red skull pillar. In the next room, beware the mancubi or a sergeant depending on your skill level. Grab the blue key in the middle. Turn left and push the skull switch (it looks as if has been pressed). The lift will lower but slowly. While it is lowering you can fight the enemies if you have not yet. Step on the lift. It rises as slowly as it lowered. At the top, approach the wall ahead and it will open to another room.

In the north westernmost room, head through the lamp corridor. The floor will lower inexpertly about at the middle of the corridor and an arch-vile or a cacodemon will be alerted. As it runs to you it will be teleported to the lamp corridor. Be sure to take a BFG9000 in time, as you can no longer visit this room. Get back via a lift. Kill the enemy that teleported here and proceed going southwards. To the left will be a room where you can obtain a combat armor. Continue going to the end, turn left and come closer to the baron wall. It will reveal a chaingunner or a baron of Hell depending on the skill level. Push the blue skull button which requires blue key to open the barrier. Step on the lift which will lead you to a dangerous room. Behind the cage is the most of the room which is dark enough to not see the actual enemies. You can use the barrels to your advantage, for example to ease killing a baron that prevents you of going further. When you deal with it, go straight until there is a lion door. Open it and you will be in the dark part of the room. Dispatch the enemies first. The button is labelled by exit sign, however it is not the exit yet. When you try to approach it in order to flip it, the floor will go down, so you will not probably press it in time. There is another room below containing, mainly chaingunners, and a baron of Hell on Hurt Me Plenty and higher. Deal with them to make them not disturb you. Return to the labelled button by lowering the lift again. Press the button which will temporarily reveal the exit teleporter. Quickly, cause the lift to lower letting you re-enter the room below (by simply stepping out of it) and enter the teleporter.

This will bring you to one of the caves. From here, you face the actual exit warded by unnoticeable spectres. Deal with them and head to the switch and press it.

A box of rockets (thing 362) is located outside the map.