MAP25: Bitter Harvest is the twenty-fifth map of the Newdoom Community Project. It was designed by BlackFyre and Darren Finch (Doom Dude). 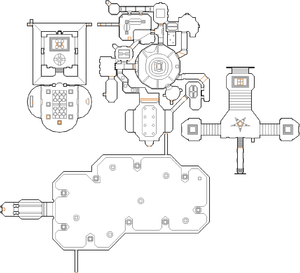 Map of Bitter Harvest
Letters in italics refer to marked spots on the map. Sector, thing, and linedef numbers in boldface are secrets which count toward the end-of-level tally.

Head forth into the dark intersection and go north. Pick up the backpacks on the pentagram symbol and this will reveal a teleporter in the middle of the intersection along with a revenant. Take the teleporter. In this chamber, the structure directly in front of you has three switches. Two of the switches require keys, so press the one that is directly in front to lower a wall up the stairs to the south. In the next room, find the two goat faces with pentagrams on them. They are on the north wall and you will notice buttons on the heads of these faces. Press both of them to access the blue skull key. You will reveal some Hell knights and barons of Hell when you grab it, and also a wall blocks your escape. To leave, press the switch on the eastern side to lower one of the columns which acts as a teleporter. Back at the chamber, press the switch on the west side which is a blue switch, then climb the stairs and go northwest to a new teleporter. You will wind up in a circular slimy area with several passageways. Head through the west door, following the path to a switch which exposes you to some more barons. Head northeast following the path until you are back to the circular area where a passage north is open. You cannot open the north door here, so just follow the path west grabbing the red key and entering the next teleporter. You will wind up back in that familiar chamber, so press the red key switch on the eastern side and go up and go northeast to the next teleporter. Go down the next path, where you can open that door you could not open earlier. But keep going down the path anyways, past six Hell knights to the circular area again. The central structure should open up revealing an arch-vile and a switch. This switch lowers a rocky wall to the southeast. The teleporter here takes you to a large arena with two cyberdemons, two cacodemons, and several rising and falling platforms. You need to shoot two switches, one in the northeast and one in the southwest, to open the exit. You need to wait and then ride a platform up to where you can visibly shoot each switch.

Possible softlock in the room with the blue skull key. The escape teleport pad can only be used once from each side; they are walk-once actions and the pad is not monster-blocked. As you avoid the barons of Hell and Hell knights, it is possible they could use up all four teleports out of the room and leave you there stuck.

* The vertex count without the effect of node building is 3083.