MAP25: Black Ice is the twenty-fifth map of Plutonia 2. It was designed by Adolf Vojta (Gusta), and uses the music track "Sanctified" by James Paddock. The par time defined in MAPINFO is 2:30. 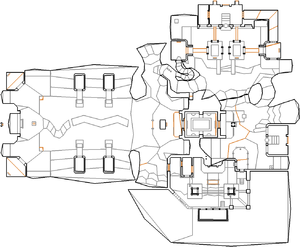 Map of Black Ice
Letters in italics refer to marked spots on the map. Sector, thing, and linedef numbers in boldface are secrets which count toward the end-of-level tally.

Kill the enemies at the start and head into the black water. After going underneath the ice, you will find yourself in another big area, with quite a number of monsters to contend with here. Head straight north to the rocket launcher room and you will find two satyr switches. Both of them raise bridges to the mancubi platforms near the center of this area, and both platforms themselves have switches raising the bars to the sides of the rocket launcher room. The left one has a few supplies in it, while the other one leads to a hall with shotgun guys. Either one causes monsters to teleport onto the mancubi platforms. Go through the halls with shotgun guys, and the bars ahead will open. The switch in the room with barons of Hell and Hell knights raises more bridges, leading across the mancubi platforms. Cross over, going westward into the other room with barons and Hell knights. Another switch is here, press it and enter the ice. You will notice metal platforms leading to the plasma gun, take them up to another large area.

This area is a large ravine, and across from where you are at are several mancubi and a couple of cyberdemons guarding the exit. You will also have arachnotrons and mancubi on your side of the ravine, and cacodemons will come out from the four side shacks. Kill all that you can and drop down into the ravine to find the red skull key in the middle of a walkway, then use the teleporters in the corner to teleport back to your side. Go to the red door to the south and open it. Open the next door and kill the horde of zombiemen inside. The next door reveals several monsters, so kill them. Look out for two arch-viles on both sides of the bridge when you cross it. On the right side of the bridge, you can cross into the chaingunners' cage using the southern steps, and you can use the stairs to the east to reach the blue skull key, which will lower for you.

Be ready to fight a horde of teleporting monsters upon picking up the key. You will notice that you are back at the starting point, but now that you have the blue key you can open the blue door. Enter and kill the cyberdemon, then through the open passage ahead is a switch. Return to the massive ravine and fight off cacodemons and pain elementals. You will notice that the walkway in the ravine has risen up, so you can cross to the other side. If you have not killed any enemies on the other side, do so now. Then press both switches on the other side to lower the exit platform.