Black Tower is a map that is part of the Master Levels for Doom II. It was designed by Sverre Andre Kvernmo (Cranium), and is contained in the file BLACKTWR.WAD. 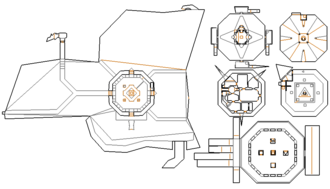 Map of Black Tower
Letters in italics refer to marked spots on the map. Sector numbers in boldface are secrets which count toward the end-of-level tally.

There are four courtyards in the ground floor. You start in the western courtyard. The southern courtyard is optional.

In the starting area of the western courtyard enter the tower. In the tower open the eastern door to get to the eastern courtyard where you do flip the switch that unlocks the teleporter area in the centre of the tower. Return to the tower and take the northern door leading to the northern courtyard. There go to the alcove located in the far corner of the courtyard. In the alcove press the skull switch that unlocks another switch in the tower. Return to the tower and press that now uncovered switch that makes a large staircase. Walk upstairs and in the end on the bridge. Enter the teleporter marked with water on the ceiling.

In the dark area press a switch in the western small alcove (it is marked as a face). Walk around and in the eastern side press the similar switch near the cell with chaingunner in it. The cell will open. Walk through the fake fence and press the button that unlocks the pen with arch-vile in the northern part (it would be rational if you kill him before). Enter the unlocked pen and open the wall in the middle containing a button. A crusher will be activated. Leave the pen and stand on the north-western platform that is lowered temporarily. You will be teleported to the second floor.

Leave the hurting pool room. Walk around the circular corridor. In the east open the door marked as switch. Open another door in the far end (the western one). Open the only door in that room. Take the teleporter before you that is marked by water pool in the ceiling.

If you try to press the switch that lowers a platform with a key on it and is located in the centre of the room, a rectangular trap will close. Press the gargoyle button in the south-western corner of the rectangle to lower it. Kill the enemies and grab the yellow key. Open the wall marked with green vines in the north-eastern part (the other walls are marked with brown vines). In that room once you approach the wall will lower. Enter the alcove and press the button there. The button unlocks the teleporter in the centre of the room in the floor. Enter the teleporter.

Once you leave the teleporter pad it will be locked. The switch in the southern part is used for unlocking the teleporter. In the northern part open the western segment of the baron rectangle. In the room take the teleport that marked with brighter light and water on the ceiling.

A second visit to the third floor[edit]

In the fourth floor you have teleported in from the fifth floor, unlock the central teleporter by pressing the switch in the south. Now, in the third floor go to the north-west room where you have unlocked the teleporter before. There you can now find a bright alcove with a medikit, a computer area map and the red key. Now escape this floor by enter the western watery teleporter.

Making way towards the exit[edit]

In the second floor return to the circular corridor, walk around it and then enter the western alcove with hurting floor. Enter the watery teleporter. In the first floor drop down and from the south enter the room with teleporter leading back to the ground floor. In the ground floor when the staircase was built it locked the northern, southern and western courtyards. Press the switch to lower barriers. Leave the tower by going through the eastern door. Now to get to the western courtyard where you have started go either through the northern or through the southern courtyards. In the west walk on the road and then down the stairs leading to the underground. Open all doors, drop down. In the red cave lower a red plaform requiring the red key. Proceed to the cave to end this level.

On the Ground Floor of the tower, it is possible for an enemy to fall through the step next to the Soulsphere switch on the spiral staircase, leaving them blocking your path. This also leaves rocket splash damage as the only means of killing them.

On the First Floor of the tower, there is an issue with cacodemons in the Western and Eastern windows not waking up properly or not floating high enough to come through the windows. These monsters can only be killed with rocket splash from a precise shot through the window or off of another cacodemon.

* The vertex count without the effect of node building is 1206.