MAP25: Blood Demesne is the twenty-fifth map of Community Chest. It was designed by Will Hackney, credited as "Archvile46," and uses the theme song of Memento Mori II MAP25: Forgotten Town, consisting of "Time Runner" and "Dredge (Extended Version)" by Mark Klem. The song was used with Klem's permission. 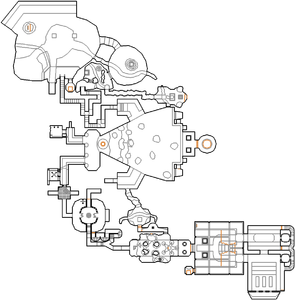 Map of Blood Demesne
Letters in italics refer to marked spots on the map. Sector, thing, and linedef numbers in boldface are secrets which count toward the end-of-level tally.

It is possible to acquire the blue key before lowering the platform. To do this, you have to bump into the platform.

* The vertex count without the effect of node building is 3311.