MAP25: Brimstone is the twenty-fifth map of NDCP2. It is referred to as Radracer on the intermission screen. It was designed by jetflock and uses the music track "". 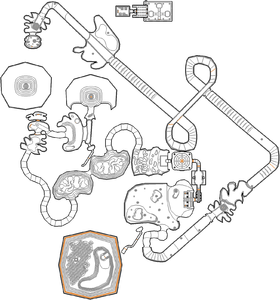 Map of Brimstone
Letters in italics refer to marked spots on the map. Sector, thing, and linedef numbers in boldface are secrets which count toward the end-of-level tally.

The following multiplayer-only Things have no flags set for any of the three difficulty classes, so they do not actually appear in the level: one each of shotgun (Thing 815), super shotgun (821), chaingun (813), rocket launcher (819), and plasma gun (817).

* The vertex count without the effect of node building is 12039.