MAP25: Catacombs: Ruined Temple is a level from Strife, accessed from MAP13: Catacombs. It uses the music track "Sad".

Once you have found Richter in the commons, he will tell you that in order to enter the factory you need a key. An agent stole it but got lost in the catacombs. Richter sent about ten good men to find the key, but they never returned. He believes that there is something down there, and wants you to find the key and fight this thing. He will open the entrance to the catacombs once you are finished talking.

The ruined temple is a big but simple area resembling a Sigil symbol. Around the center area are smaller areas containing items like health and ammo. The level has many enemies, including acolytes, sentinels, reavers, templars and a few crusaders, yet the highlight of this place is a spectre that is inside of what seems to be a small pyramid, that stands in the center. This spectre is believed to be that of the Programmer, since it uses Sigil A blasts, like the Programmer. 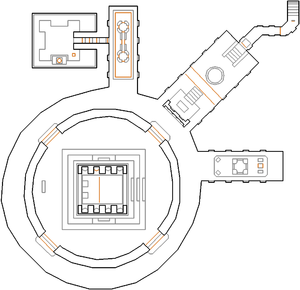 Map of Catacombs: Ruined Temple
Letters in italics refer to marked spots on the map. Sector, thing, and linedef numbers in boldface are secrets.

As the level starts, fire some phosphorous grenades into the narrow passages either side of the raised platform in front of you. This will draw a number of enemies to you who will perish in the flames. Once the way ahead is clear, go forward and climb the steps into the round walled area where you will find a step pyramid. If all the crusaders have been destroyed then the pyramid will be open and you will be able to fight the spectre inside.

The spectre uses the same attack as the Programmer but gives no warning, so stay on the move; if you are close enough then you may be able to destroy it with a single Sigil blast. Once the spectre is destroyed, collect the mine and factory keys from inside the pyramid and then backtrack to the starting area. Go down the steps to return to the catacombs.

Go into the eastern dead-end and head around the stone structure to find a square platform between two pillars. Step on the platform and it will lower like a pressure pad; the walls of the stone structure will also lower to reveal a pile of high-explosive grenades, plus a grenade launcher in multiplayer.

There are no official secrets in this level in the original game. The Veteran Edition changed the non-official secret below to be official.