MAP25: Chaos Zone is the twenty-fifth map of Requiem. It was designed by Adam Windsor, and uses the music track "Take All (I have more)" by Mark Klem. It is unusually small compared to many other levels in the megawad, especially at such a late stage.

A small fortress over-looking a lake of lava. Probably be a prime piece of real estate for a Demon. Let's see what a pissed off marine with a Rocket Launcher can do to the property values around here.... 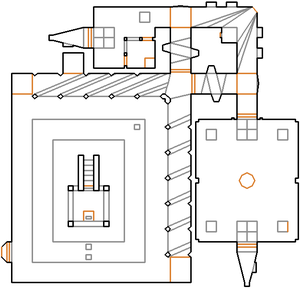 Map of Chaos Zone
Letters in italics refer to marked spots on the map. Sector numbers in boldface are secrets which count toward the end-of-level tally.

Grab the chaingun and head into the field. Grabbing the red skull key in the middle triggers a zombie ambush on the pentagrams. Kill the monsters and head to the red door to the north. Use the lift, but go straight across to the hall with the Hell knights. Go around the bend and use the next lift, again going straight across into the next room. Open the doors in the next room to retrieve the yellow skull key, watching out for a monster ambush after picking it up. Then take either lift you passed upward to a cacodemon and a yellow door. Enter and you will be on a caged ledge with lots of supplies. Head into the field and head for the southwest corner. Open the door and press the switch inside. Look out for teleporting monsters, and head up to the caged ledge to encounter an arch-vile guarding the blue skull key. Grabbing the key triggers another monster ambush. To reach the central structure in the field where the blue exit door is, head to the south of the field and jump the blocks to the center. Then climb the stairs to the blue door and exit.

* The vertex count without the effect of node building is 468.

This level was originally meant to be MAP28 of the sixth part of Demonfear, Demonfear 6: The Heart, which was intended to come out in 1996 but was never released. Windsor would eventually create an entirely different "Demonfear 6" in 1999, and he compiled the whole series into one megawad a year later.

This level was intended to be MAP26: Excoriation. However, the levels were switched around during compilation and the level titles were not swapped with them.[1]