MAP25: Congo is the twenty-fifth map of PlayStation Final Doom and is the first level of the Plutonia episode. It is based on the PC version of MAP01: Congo from The Plutonia Experiment (originally designed by Milo Casali), with changes to accommodate the PlayStation's memory limitations and add enhancements such as colored lighting. Changes for the PlayStation port were authored by Tim Heydelaar.[1] It uses the music track "Slow Demonic Pulse". 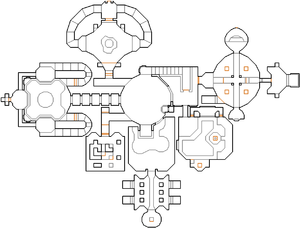 You can start the level by obtaining the shotgun from killed shotgun guys. For this, open a door on either left or right then walk upstairs. Before shooting the shotgun guys who are turned back to you wait until they are being shot by the other shotgun guys inside the other windows causing an infight between them all. When one or two of the nearby enemies are dead you can take one or two shotguns. Kill the other enemies through the window or go ahead into the corridor where you can also kill them. In the room, press the switch to find a stash with a box of shells, blue armor and a backpack (optional). Now, kill the rest of the shotgun guys and return to the starting position via the any staircase (either the one you have used or the other unused one).

Equipped with the shotgun in the starting position, go straight through the tunnel (east). In the next area you can access the optional areas where a super shotgun and a rocket launcher are hidden. Unless you want them skip the two paragraphs.

To get super shotgun sharply turn right making a bend, so you will find a vined-wall corridor. Before you open the door turn around and approach the door. A trap with two chaingunners will open. Kill them and take their chainguns (if the wall traps closes while you are inside open it manually or if you want to open it again to get the wanted items approach the door like you did). Now enter the door to discover a crate room. Inside you will see a chaingunner and an imp/chaingunner (skill-sensitive). Kill the two enemies and go to the left. Press use on the small gray crates to lower them, so you could climb over the crates and get the weapon. However, beware of a revenant hiding inside the opened crate behind you. Before dropping from the crates find a box of shells here, then fight the revenant. Now leave the room via the door.

To get the rocket launcher return to the central area and go into the large mud hall to the right (south). In the hall enter the column room where enter the third room with 4 shotgun shells and a single pillar. Behind the pillar is a switch. Press it to open the four doors in the previous room. Prepare to fight with enemies behind these doors which are shotgun guys/chaingunners/revenants (skill-sensitive). Fight them and visit all the four room to find three boxes of rockets and the mentioned weapon, rocket launcher. Now get back to the central area.

Now when you are equipped (or not) with five weapons in total, take the staircase up in the north side of the area (you may visit the second vined corridor to the north west but there is no any interest without the blue key yet). In the upper room, take the only door to find a four-way intersection. The mud does not hurt but if you fall down use the teleporter to get back. Walk on the bridge and prepare for a chaingunner behind you and another revenant behind the column which lowers when you approach it. When it is killed take the room to the left (north). In the room, kill an imp, take items and flip the switch to access the west room in the four-way intersection. Return there and approach the entrance of the aforementioned room. Fight the one or two cacodemons (skill-sensitive). You also can find secret #1 now. Go into the east room, which is red. Entering the room opens a trap with a revenant ahead and notifies about two chaingunners on either side. Kill the revenant with your rocket launcher, then carefully destroy each chaingunner (sheltering behind the entrance wall). Take the red skull key and other items.

Now get through the four-way intersection and the upper room back to the central area and take the vined corridor to the right (north west). Open the door to the next area. The blue key will be observable. Entering the area opens two traps with chaingunners behind you. Be careful. Open the red door and flip the switch in the room to make the blue key accessible. Fight the other chaingunners in the opened traps before you take the blue skull key. Additionally, you can take both staircases to find stimpacks.

Finally, when you have the blue key, go up the stairs back to the upper room. This time, take the narrow corridor to the south, instead of the door. There will be numerous chaingunners on the right side and one/two/three revenants to the left (skill-sensitive). Destroy the chaingunners with the rocket launcher, and kill the revenants with the same weapons too. You may drop here down to the ground to then lower the lift to get the chainguns and a medikit (optional). The only essential steps you need to do now are to open the blue door (and the second door in the blue room) and to step over the exit portal to finish the level.

You can practice a trick of being sheltered from the chaingunners attack before entering the cargo room with the super shotgun. If you manually close the fast door when one or two chaingunners try to shoot you, you will protect yourself easily.

The large crate that lowers when you collect the super shotgun in the crate room (revealing a revenant) can only be lowered twice. This can rarely result in the revenant getting stuck inside the crate, making 100% kills impossible. A player can also be trapped on top of the crate, forcing them to restart the level or wait to die (as the top of the crate is a damaging floor).

After players lower the blue skull key pedestal two chaingunners traps will open. However, the same tag is accidentally applied to one of the torch niches in the staircase alcove in the central area, which will be lowered by eight units into the floor.

Several revenants in the level are marked to appear on Deathmatch only and hence will never spawn as there is no way to enable monsters in this multiplay mode:

* The vertex count without the effect of node building is 944.