MAP25: Cow Face is the twenty-fifth map of Kama Sutra. It was designed by Adolf Vojta and uses Mark Klem's "Dry Rot", the music of Requiem's MAP18: Base of Thorn and MAP23: Hatred. The version of "Dry Rot" used in this level plays at a slower tempo for unknown reasons.

I thought I would do a map similar to HR map 25, but the result seems rather different and Radeg said it reminds HR map 32. So it's probably inspired by both of them. The name of the map is strange but when I watched it on the automap... I saw there a face of cow so why not to use it as a title? :) 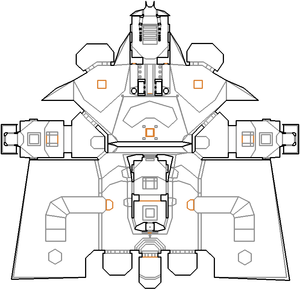 Map of Cow Face
Letters in italics refer to marked spots on the map. Sector numbers in boldface are secrets which count toward the end-of-level tally.

* The vertex count without the effect of node building is 1047.