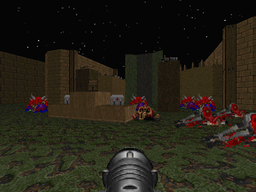 This is my favorite of my maps in Hell Revealed. Excellent for deathmatch (but play level 2 in deathmatch mode to get the most out of this map's deathmatch potential), and also very good for single player or coop. Action all the time, in this small but heavily-populated outdoor area. Release more and more enemies until you reach the blue key on the bridge and can exit. This map is very good to play speedy with 100% kills/secrets. It is much easier than most of Hell Revealed, and has much health and ammo. So don't quickly skip this opportunity for fun! 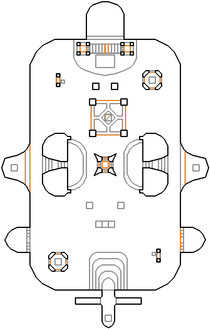 Map of Dead Progressive
Letters in italics refer to marked spots on the map. Sector, thing, and linedef numbers in boldface are secrets which count toward the end-of-level tally.

This map is pretty straightforward, as it is one giant arena to test your skills. Just kill everything and activate any switches that you can access.

Do not worry about ammo, as they are plentiful in this small level. The same goes for health, but beware of the environment, because you might suddenly get surrounded in a massive ambush of enemies. To actually beat the map, approach the metal pillar with the megasphere on it, then head to the southern side of the central green structure to find a skull switch. When you press it, some closets to the south with revenants in them will open. Enter the eastern closet, then return to the central green structure. The eastern side has a skull switch, which reveals another skull switch on the western side, but also causes two arch-viles to teleport in as well. Pressing the western switch reveals two more closets, this time with cyberdemons inside. Enter the western closet, then return to the central green structure to find a skull switch on the northern side. Although the switch has blue key markings on it, press it anyways and the metal pillar behind you will open revealing a two-sided teleporter. Enter it from either side to reach the bridge where the blue key is, but look out for the trap that triggers. Now return to the blue switch on the central green structure and press it to open the exit, with an arch-vile guarding it. Watch out for the spider mastermind who appears from behind as well.